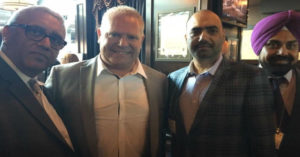 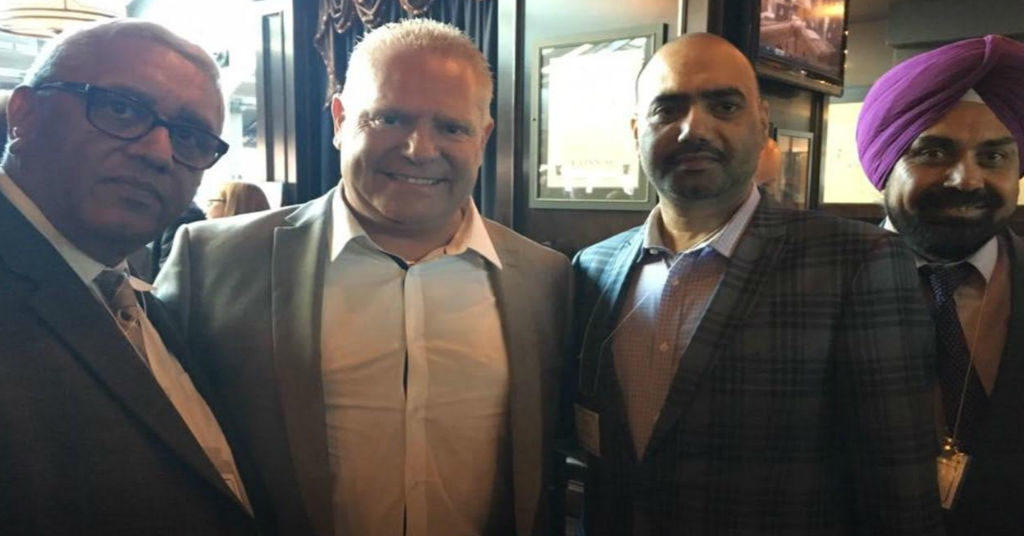 An Ontario PC Party candidate has been linked to a man smack in the middle of a growing data-theft controversy.

Harjit Jaswal, who is running for the PCs in Brampton Centre, appears in several photos obtained by PressProgress alongside Snover Dhillon, as does Ontario PC leader Doug Ford, and party president Jag Badwal.

Dhillon is a former party organizer whose company – D-Media – has been linked by the National Post to data obtained through an “internal theft” of customer information at Ontario’s 407 private freeway company. (He is no longer a PC member and maintains his innocence.)

Simmer Sandhu – a former employee of the company who was running for the PCs in Brampton East but resigned his candidacy last week shortly after news of the theft broke – also appears in one of the photos.

The images potentially raise questions about the nature of Dhillon’s involvement behind the scenes and his connections to significant figures within the PC party.

“The Post Millennial spoke with Dhillon last night, who said it was Sandhu who provided him with the 407 data, but that he did not know at the time that it had been improperly obtained. The National Post..said Sandhu gave the data to one other unnamed candidate. Dhillon has since told The Post Millennial that it was Brampton Centre candidate, Harjit Jaswal, who is also a client of Dhillon’s.”

Ford has said he does not know Dhillon, though the two have appeared in several photos together, including this one dated May 10 2016: According to the Post Millennial, Dhillon was also a guest at 2016’s Ford Fest event and has previously fundraised for Ottawa-area PC incumbent Lisa MacLeod.

“He doesn’t know me that well. He’s not a ‘friend’ friend. I only know him as a political leader.”

The third man on the far right of the May 2016 photo is Jaswal, currently running for the PCs in Brampton Centre.

Jaswal and Dhillon have appeared in several more photos together: “Several Conservative sources say Dhillon worked for candidates in a number of nomination campaigns over the past year and a half that ended in heated disputes, with allegations of membership fraud and vote stuffing. Sources said they saw him ushering in large numbers of new members to the meetings.”

Last week, Ontario PC leader Doug Ford was grilled over allegations surrounding the stolen data with one reporter citing sources claiming that as many as 29 PC candidates “paid substantial” sums for a specific method to win their candidacies involving international students and names taken from the 407 ETR list.

“We heard of one candidate. As you know, I acted immediately. If there’s any other issues, I can assure you I’ll deal with it immediately.”