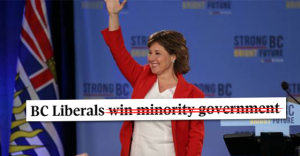 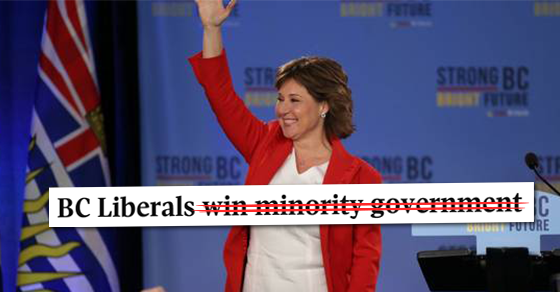 Don’t listen to the headlines. Christy Clark absolutely did not ‘win’ a minority government

"It's false to report the election resulted in a B.C. Liberal minority government."

As British Columbians woke up the morning after Tuesday’s provincial election, many headlines reported Christy Clark’s BC Liberals had “won a minority government.”

Just one problem – the BC Liberals did not “win” a minority government. Leaving aside the fact that 176,000 absentee ballots remain to be counted – enough votes to shake-up the final seat count, so it’s still anybody’s ball game – these kinds of headlines paint a dangerously misleading picture of how Canadian democracy actually works.

Canada is a representative Westminster democracy – that means voters don’t directly elect governments or premiers or prime ministers, we only elect parliaments (or legislatures).

Why does splitting hairs over this detail matter? Because in the Canadian system, the government is not chosen by voters – voters choose representatives and representatives work together to form governments. That’s just how things work.

In British Columbia and all across Canada, governments are led by whoever is able to command the confidence of the House (or Legislature). As BC political blogger Steve Tweedale recently explained:

So, as DeSmog Canada summed it up:

“It’s false to report the election resulted in a B.C. Liberal minority government.”

Yet that’s exactly what many headlines said Wednesday morning: Again people, the rules of government formation.Have them tattooed on you. pic.twitter.com/JAV4td4JfC

In this case, if the current seat count more or less holds up, it looks like it might fall on Andrew Weaver’s Greens to decide if they’ll prop up Clark’s Liberals or work with the NDP to remove Clark from power.

It’s understandable if this all seems confusing – Clark herself seems to be going out of her way to sow confusion and create false impressions.

It seems like Christy Clark is reading her winners speech. She didn’t win tonight. There is still so much to be decided. #bcvotes

Then again, Clark’s faux victory speech shows she doesn’t want to let go of the reins of power – and headlines claiming she “won” something she did not actually “win” only help her create the false impression she is the only one with the authority to govern.