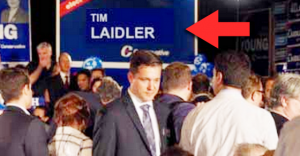 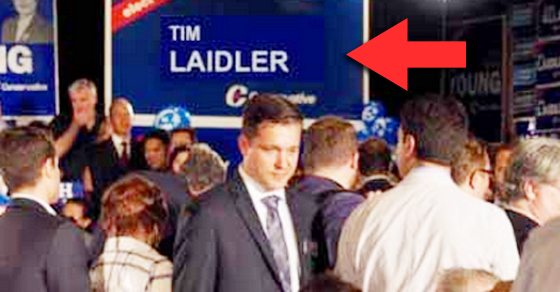 Did this Conservative candidate photoshop his name over another candidate’s election sign?

Is Tim Laidler the Conservative candidate of the 21st century?

UPDATE: The Tim Laidler campaign has confirmed to VanCityBuzz that they did, in fact, photoshop Laidler’s name over another candidate’s sign.

Is Tim Laidler the Conservative candidate of the 21st century?

It’s possible, if the Conservatives’ choice for Port Moody-Coquitlam digitally altered a photograph to remove another Conservative candidate’s name from an election sign and replace it with his own.

What’s Laidler’s latest adventure in the world of photography?

Check out that “Tim Laidler” sign in the background of the image below. Notice anything… Strange? Why does “Tim Laidler” appear in a font different from other Conservative election signs? What is up with that fuzzy, pixellated, off-blue rectangle just behind the words “Tim Laidler”?

Did Laidler photoshop his name onto another candidate’s election sign?

The photo above was taken at a Richmond B.C. rally headlined by Stephen Harper in August which Laidler attended.

Laidler’s campaign is keeping quiet – they will not even confirm they sent the e-mail in which the digitally altered photo appears, despite multiple requests for comment (including the tweet below).

Hi @LaidlerTim. Did your campaign send an e-mail to supporters on August 25th?

But a copy of the e-mail sent to Laidler’s supporters on August 25th obtained by PressProgress sure looks like it came from the Tim Laidler campaign:

After being presented with before and after images of Thind’s altered sign, Thind’s campaign managers told PressProgress that “since we have no idea what you’re talking about, we have forwarded your concerns to head office.”