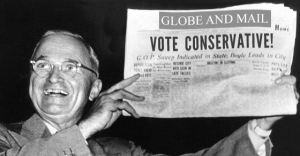 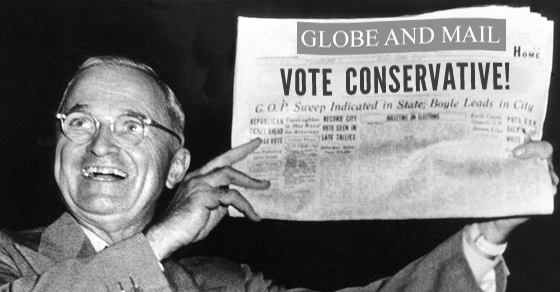 Did the Globe & Mail even read its own editorials before endorsing the Conservatives?

In what's been called "the most bizarre endorsement ever," the Globe and Mail told its readers to vote for the Conservatives while simultaneously calling for Harper's resignation.

In what’s been called “the most bizarre endorsement ever,” the Globe and Mail told its readers to vote for the Conservatives while simultaneously calling for Harper’s resignation:

“Canada needs a change. It also needs the maintenance of many aspects of the economic status quo. What Canada needs, then, is a Conservative government that is no longer the Harper government.

It is not time for the Conservatives to go. But it is time for Mr. Harper to take his leave.”

What does this even mean?

Some Twitter users mocked the Globe’s logic of putting Harper and the Conservatives in two separate boxes:

In what may be the dumbest endorsement editorial ever, @globeandmail endorses imaginary Tory party not led by Harper http://t.co/3mjLgAp0HI

I like the globe, but not the mail. #deepthoughts #otherglobeendorsements

We endorse communism, but not that Stalin guy. #OtherGlobeEndorsements

But what is maybe more bizarre is how the Globe could seriously advocate voting for a party that the Globe’s own editorial board criticized countless times for moves they called anti-democratic, xenophobic and opposed to Canadian values.

Maintaining “the economic status quo” takes precedence over all of those things? Really?

Here is what the Globe said about Bill C-51 in February. Who do they think voted for that?

“If Bill C-51 passes, CSIS will be able to disrupt anything its political masters believe might be a threat.”

And hey, which party voted for a bill they said would turn CSIS into a “secret police force”:

“Parliament must not allow Mr. Harper to turn CSIS, an intelligence agency, into a secret police force.”

Which party voted for the (Un)Fair Elections Act? Didn’t they say it would “disenfranchise hundreds of thousands of Canadians”?

“The bill’s change to voter-identification rules threatens to disenfranchise hundreds of thousands of Canadians.”

Which party supported legislation that was so “bad,” the Globe did a “five-part series of editorials” explaining how it will “harm the foundation of our democracy”?

“How bad is the legislation? This newspaper recently took the unprecedented step of publishing a five-part series of editorials on it, and the ways in which it will harm the foundation of our democracy…The Fair Elections Act must be stopped. Killing it should be Parliament’s first order of business.”

Which party’s “rhetoric” on charities created a “chilly climate for free speech”? Was it not “Tory rhetoric”?

“The implication is that charities should confine themselves to good works – be seen but not heard. That’s a strange view of democracy. Silence the churches? Anti-poverty groups? Breast cancer research fundraisers? Would we have anti-smoking laws if opposing the tobacco companies was seen as un-Canadian?”

By the way – which party did nothing on climate change?

“For years, Prime Minister Stephen Harper has been promising a greenhouse-gas policy to deal with emissions from Canada’s oil industry. On Tuesday, Mr. Harper abruptly revealed his sort-of plan. It can be summed up in two words: Do. Nothing.”

And which party did the Globe compare to an evil Victorian literary character for their treatment of veterans?

“Call this Captain Jekyll. Then there is Minister Hyde: the coldly calculating technocrat who has cut disability payments for modern-era veterans, left critical services underfunded, and even argued in court that the federal government has no moral obligation toward its veterans. It would be nice to know which federal government is pinning a poppy to its lapel today.”

Which party wanted to impose “normal cultural values” and send “Canada’s basic freedoms” down the drain?

“The day a government imposes “normal” cultural values is the day Canada’s basic freedoms go down the drain. We cannot become a country that selectively bans religious practices that have no demonstrably harmful consequences for others.”

Say, and which party voted for an “ugly, xenophobic” and “disturbing” law that risked treating 830,000 Canadians “as somehow less Canadian”?

“The law has a flip side that is much darker. It gives the government the discretion to strip the citizenship of any dual citizen convicted of terrorism, treason or spying abroad. The consequences are disturbing and unfair for Canada’s 863,000 dual nationals. They run the risk of being treated as somehow less Canadian. There is an ugly, xenophobic side to this law, which may play well with some voters, but has no place in a modern, multicultural Canada.”