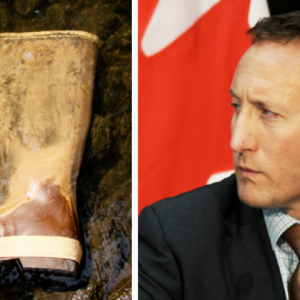 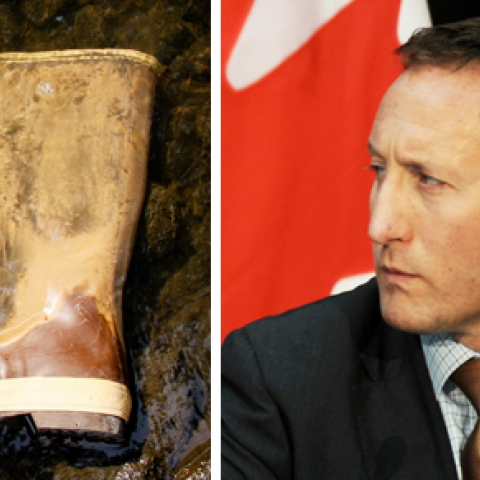 Could this old rubber boot do a better job as Justice Minister than Peter MacKay?

Peter MacKay is having a really bad week month tenure as Justice Minister. After a series of blunders as Canada’s Defence Minister, we were optimistic that MacKay would do a better job in the justice portfolio. We were wrong. Here’s a roundup of recent blunders: MacKay-splaining why there aren’t more women on federal courts Speaking last week at a meeting of […]

Peter MacKay is having a really bad week month tenure as Justice Minister.

After a series of blunders as Canada’s Defence Minister, we were optimistic that MacKay would do a better job in the justice portfolio.

We were wrong. Here’s a roundup of recent blunders:

MacKay-splaining why there aren’t more women on federal courts

Speaking last week at a meeting of the Ontario Bar Association’s council, MacKay offered what was variously described in the Toronto Star on Thursday as a “disappointing,” “bizarre,” “frustrating” and “offensive” explanation of why more women aren’t appointed to sit as federal court judges.

Arleen Huggins, president of the Canadian Association of Black Lawyers, told the Star that she asked MacKay “what steps the government would take to address the lack of diversity and of visible minority judges on the bench.”

MacKay proceded to ignore the part of the question about visible minorities; “his response was then exclusively focused on women,” Huggins said.

Apparently, Mackay acknowledged there should be more women on the bench, but “they simply aren’t applying,” Ottawa lawyer Jonathan Richardson told the Star.

“According to people in attendance last Friday, MacKay said that as a new father he understands women’s reluctance to leave their children because, while he didn’t want to downplay the role that fathers play, women have a special bond with their children,” the Star reported.

Doesn’t understand his own prostitution bill

After releasing his much anticipated prostitution bill earlier this month, Justice Department officials were forced to “clarify” three mistakes MacKay made in explaining how the proposed new law would work.

1. Suggested underage girls found working together would be arrested for “selling in the presence of a minor.”

On June 4, MacKay said: “some prostitutes we know are younger than 18 years of age. If they are in the presence of one another at three o’clock and are selling sexual services, they would be subject to arrest … They’re selling it in presence of a minor.”

Justice Department officials later clarified that according to the law, “underage prostitutes would not be charged for being in each other’s presence,” the CBC reported.

2. Explained how a child living in a home with a mother who was selling sexual services out of her own home could be charged with a crime.

“They could. They could on evidence,” MacKay told a reporter who asked if a woman selling sexual services out of her own home could be charged if children were present.

“If children are being exposed to prostitution in a way that is deemed to be affecting them in a negative way then charges could arise, but that would be very much based on evidence the police would have to produce. So children, to use your example, whether they are the children of the prostitute themselves or children from anotehr family, another marriage, that would be interpreted by the police and they would have to decide whether charges would be laid.”

Justice officials later clarified to the CBC that “there is nothing in the new bill that would permit police to charge a prostitute for selling his or her services from home if children live there.”

There are existing laws that would apply if the health and safety of children are found to be endangered.

3. Said women can be charged for advertising sexual services. Actually, no. No they can’t.

“If there is a direct connection to the selling of sex that does not present itself in a public way then it would be legal,” MacKay said about advertising sexual services in newspapers and websites. “But if it is done so in a way that is perceived as public or available to those under the age of 18 it would be illegal.”

Justice officials later clarified to the CBC that “prostitutes advertising their own services cannot be prosecuted under the new law.”

In what Privacy Commissioner Daniel Therrien calls a “seminal” ruling, the Supreme Court ruled last Friday that police need search warrants in order to compel Internet Service Providers to turn over information about their subscribers’ identities during investigations — something that could pull the rug out from under the feet of the Conservatives’ draconian new cyberbullying bill (C-13).

“All along we’ve said the government’s online spying Bill C-13 is reckless and irresponsible and today’s ruling vindicates those concerns,” OpenMedia.ca’s Executive Director Steve Anderson said after the ruling.

For MacKay, however, the Supreme Court ruling was a nothing short of a victory, for some reason:

“The Supreme Court’s decision actually confirms what the government has said all along, that Bill C-13’s proposal regarding voluntary disclosures do not, I repeat, provide legal authority to access to information without a warrant,” MacKay told the House of Commons.

When asked for comment on MacKay’s response, one MP “broke into laughter for several seconds before saying, ‘You can quote me on that.'”

“All of the discussion in and around C-13 around how sensitive subscriber information is, and whether it deserves privacy protection under law – in this case, under the Charter – has now been put to bed. The Supreme Court agrees that this is sensitive information, that it is entitled to constitutional protection. That is a huge clarification from the Supreme Court,” Therrien told the Globe and Mail.

He added: “At a minimum, I would say the immunity clause in Bill C-13 becomes essentially meaningless as authority for [telecommunications companies] to share information with law enforcement. So [government] may or may not wish to amend the clause in question. It’s either meaningless or it would have to be amended to more directly accord with what the Supreme Court is saying.”

In December, MacKay lashed out at judges who were ignoring “tough on crime” rules requiring strict fines on people convicted of crimes. Some judges complained the mandatory surcharge removed their discretion to waive fees if an offender was so poor that he could not pay the penalty.

“Those people in the soup kitchens I see in the courtroom, they don’t have a voice,” Justice Colin Westman told the Globe and Mail. “I have an obligation to them.”

In response, MacKay said he didn’t see what the big deal was.

“You pay it back over time. But not a disproportionate and ludicrous period of time as some judges have meted out. There are even within some prisons the ability for prisoners to be paid. And sometimes they might even have to, God forbid, sell a bit of property to pay and make compensation to their victim,” MacKay told the Ottawa Citizen.

By comparison, an old rubber boot would be less prone to talking off the top of its head — a good case in favour of the boot.