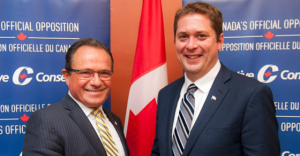 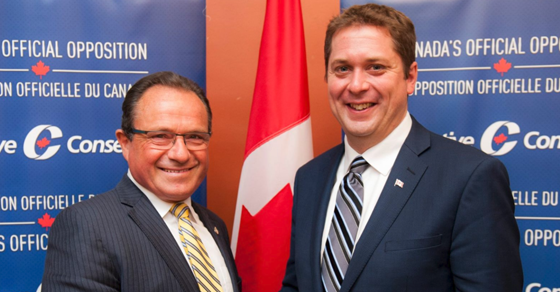 The same Conservative MP once predicted society would collapse if same-sex marriage was legalized.

This is what we can expect from Andrew Scheer’s so-called “middle-of-the-road” Conservatives?

After police launched a hate crime investigation into the shredding of Pride flags at several Waterloo-area schools, local Conservative MP Harold Albrecht says he wants to see “corrective action” to appease those who are “deeply concerned about the flying of the rainbow flag.”

In a local news story covering the incidents, Albrecht issued a statement to the New Hamburg Independent suggesting the presence of Pride flags creates division instead of promoting inclusion.

Albrecht would go on to accuse the schools of violating “flag protocol” and letting down “our veterans who have stood for the freedoms which the Canadian flag represents”:

“Many of these flags are being flown on the same mast as our Canadian flag. This is a troubling practice as it diminishes the dignity and the honour of our flag.”

Not everyone’s buying Albrecht’s spin, though.

Cait Glasson, a Canadian Forces veteran and a board member at a Waterloo-area LGBTQ group called Spectrum, told the Independent she rejects Albrecht’s suggestion that the attacks show why Pride flags should be removed:

“The scattered incidents of vandalism have only underlined the need for this gesture.”

Which is more important, the rights of a flag, or the dignity of all students being respected? Not a difficult one for me, a CF veteran. https://t.co/8yXx3B1dUb

Before he was elected in 2006, Albrecht’s local paper described him as “the founder of a fundamentalist church that opposes abortion and same-sex marriage,” organizing protests against same-sex marriage alongside far-right groups like the Canada Christian College and Canada Family Action.

In a 2003 letter published in the Kitchener Record, Albrecht condemened “our courts and Parliament” for choosing to “ignore God’s wisdom in their voting process,” declared that “marriage is God’s idea, not man’s” and warned of societal collapse if same-sex marriage was legalized:

“These same-sex marriages would succeed in wiping out an entire society in just one generation.”

Albrecht has also delivered speeches in the House of Commons calling for “reopening the debate on traditional marriage.”

In May, the Waterloo Region District School Board announced it would fly rainbow flags outside all its schools for the month of June in support of Pride.

The school board’s Director of Education John Bryant explained the move as an effort to “create inclusive, safe spaces” and “ensure the well-being of all students and staff”:

“Raising the Pride flag demonstrates our commitment to supporting all of our students, staff, parents, caregivers and community members.”

On June 1, all #WRDSB locations will raise the Pride flag for 30 days in support of Pride Month: https://t.co/KCiwpjI0ZJ ?️‍??? #WRDSBPride pic.twitter.com/GWHikBQ3am

On June 30, Pride flags were shredded and graffiti was sprayed on flagpoles at several area schools.

Similar graffiti was also sprayed in the entrance to the school board’s head office, leading investigators to believe the attacks were targeted rather than simply random acts of “property damage or mischief.”