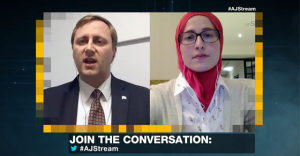 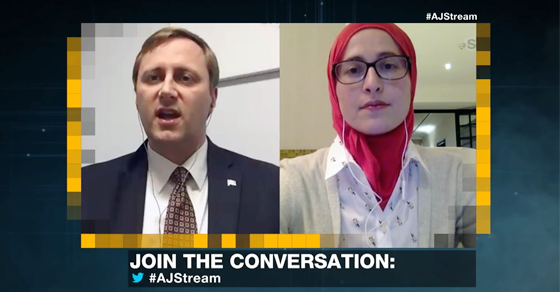 "The weather. It's cold in Canada. Really cold. That's the biggest problem for Canadian Muslims"

Conservative leadership candidate Brad Trost says he thinks “hate crimes” are no big deal for Canadian Muslim, but he’s pretty sure he knows what “the biggest problem for Canadian Muslims” really is – “the weather,” because it’s “really cold.”

Appearing on Al Jazeera’s The Stream to explain his opposition to a motion condemning racism and islamophobia last week, the would-be Conservative leader from Saskatoon shared his thoughts on what is “the biggest problem” facing Muslims in Canada.

According to Trost, “hate crimes” can’t be a problem because there are slightly higher numbers of reported hate crimes targeting “Jewish Canadians and Canadians of African descent,” but he suggests data from an 11-year-old poll points to the real answer:

For one thing, the statistic Trost cited from a 2006 Environics poll Canadian Muslims doesn’t ask whether or not anyone thinks hate crimes exist. Actually, it’s from an open-ended question asking respondents to “name their least favourite thing about Canada” (they were asked to name their favourite things about Canada too).

Some said the weather (24%) but others said “lack of economic opportunity,” “taxes” and yes, also “discrimination and treatment of immigrants.”

Seriously? Trost points to this generic question in an 11-year-old poll as proof discrimination does not exist?

Besides, how relevant is a decade old poll taken in a different historical context than the one today, before the rise of xenophobia associated with the global far-right and Donald Trump?

He also suggests Statistics Canada data backs up his claim that anti-Muslim discrimination is not a “problem” because other groups are more discriminated against.

Besides, the National Council of Canadian Muslims points out that “people are often reluctant to report a hate crime” for a variety of reasons, including “a sense of humiliation, a sense of bringing negative attention to themselves and not always (being) sure they’re going to get support.” And Statistics Canada cautions that hate crime statistics can be influenced by things like the level of awareness victims have of hate crime laws.

It’s been one thing after the next all through Trost’s Conservative leadership campaign:

• A few weeks ago, Trost announced he will never “march in any gay pride parade” or “fund any gay pride event of any kind” – “Brad’s not entirely comfortable with the whole gay thing,” Trost’s campaign manager later explained, also noting that “Brad is not a big fan of the gay lifestyle.”

• Trost has also told his supporters he thinks “man-made climate change is a lot of hooey,” and stated at a leadership debate that Canada should not “concentrate on climate change” because it’s not a “scientific issue.”