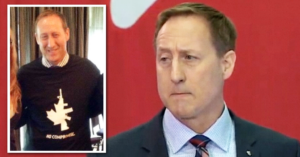 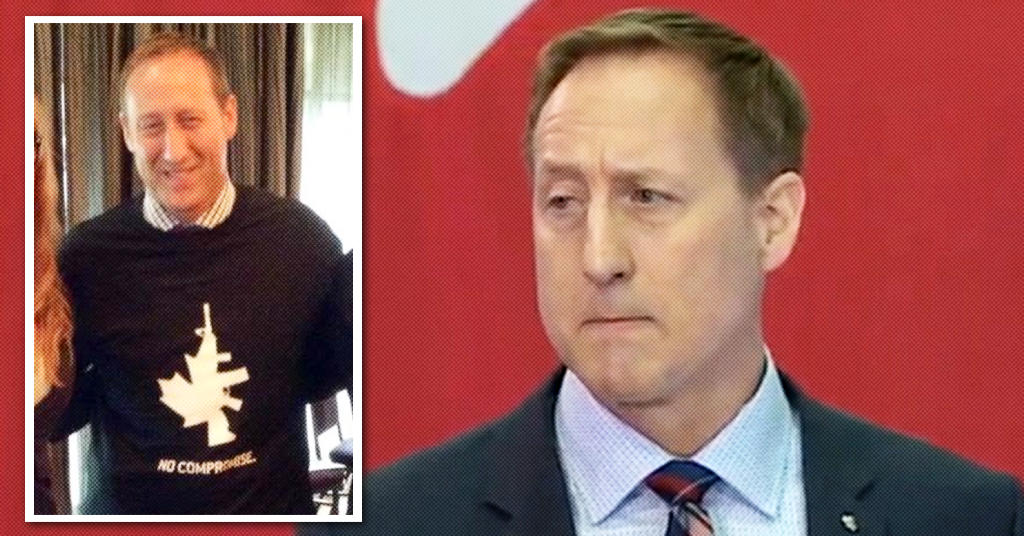 The Conservative MP who campaigned for looser rules on military-style AR-15 rifles says he is endorsing Peter MacKay for leader of the Conservative Party of Canada, declaring the two men are “on the same page” when it comes to gun control.

Bob Zimmer, MP for the BC riding of Prince George-Peace River-Northern Rockies, announced he was endorsing MacKay in a Facebook post Friday evening.

The AR-15 is a highly controversial weapon that has been used in most of the deadly mass killings over the last decade, including the attacks in Newtown, Connecticut, Parkland, Florida, Aurora, Colorado and Las Vegas, Nevada.

In the comment section below his endorsement, one of Zimmer’s constituents asked the Conservative MP what is MacKay’s “stance on gun control?”

“We had a good talk about the subject,” Zimmer replied. “We’re on the same page.” 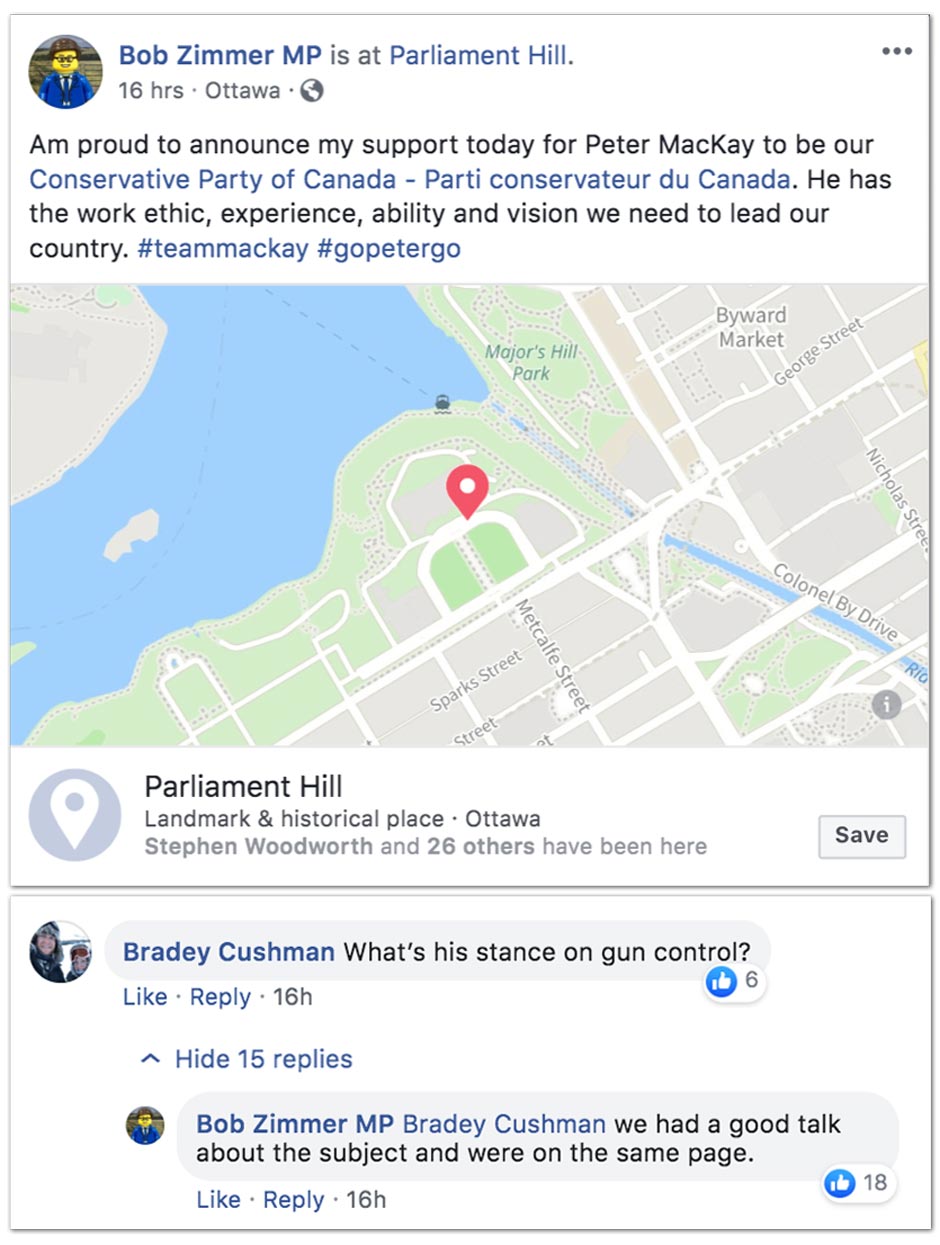 Zimmer did not respond to questions from PressProgress requesting additional information about his “good talk” with MacKay or any assurances MacKay gave Zimmer about his positions on gun control.

In 2014, PressProgress was first to report on MacKay’s questionable fashion choices while at a Conservative fundraiser in Edmonton.

The then-Justice Minister appeared alongside two members of a far-right gun group wearing a t-shirt featuring an image described by the Toronto Sun’s Brian Lilley as a “maple leaf blended with an AR-15 rifle.”

The shirt was emblazoned with the words: “No compromise.” 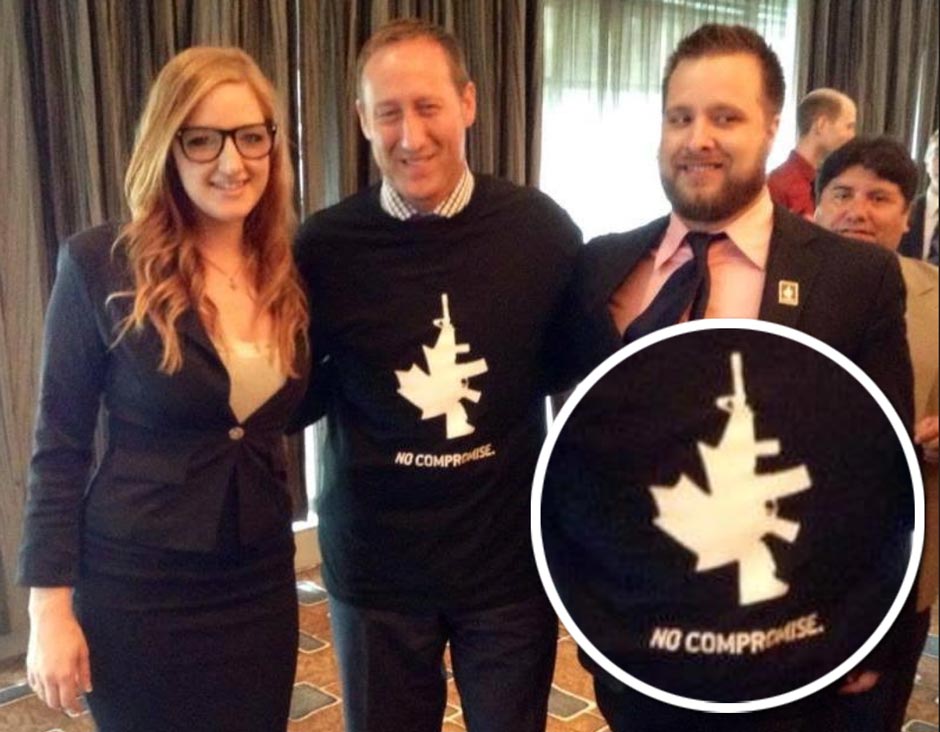 The National Firearms Association, the gun lobby group whose “no compromise” design is its registered trademark, had sparked controversy only months earlier when it used a mass shooting in Moncton, New Brunswick that left three RCMP officers dead to push for looser gun control laws.

Despite donning their t-shirt, the NFA had been sharply critical of MacKay when he served as Stephen Harper’s justice minister.

In one posting titled “Does Peter MacKay want to grab semi-autos?” the far-right gun group told its supporters they should be “very concerned” about the “Red Tory,” citing a quote of MacKay’s reacting to a 2006 mass shooting at Dawson College.

MacKay suggests “certain types of weapons” such as “automatic and semi-automatic weapons” ought to be banned.

The group encouraged its members to contact MacKay and “sort him out.” 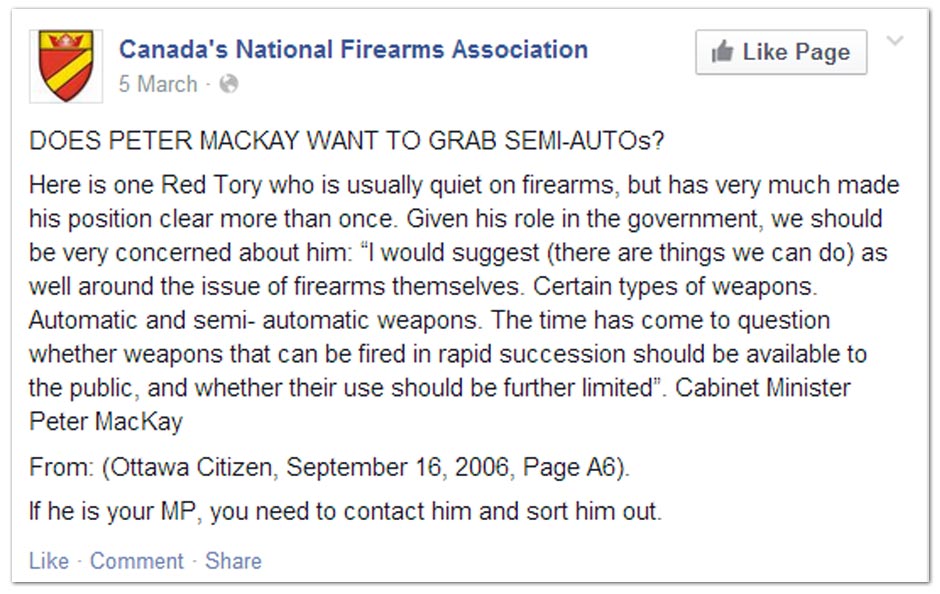