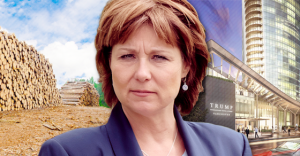 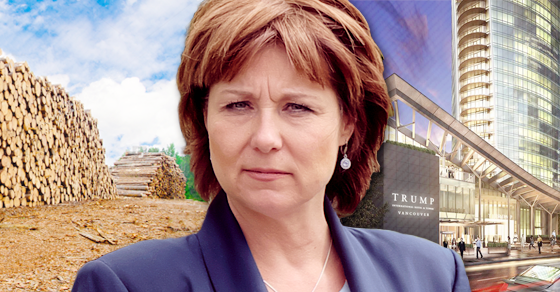 Christy Clark had been attempting to link the opposition BC NDP to Donald Trump and American lumber interests.

Looks like Christy Clark’s hypocrisy is valued around half a million dollars.

The BC Liberal leader has spent the week thinking up ways to suggest the opposition BC NDP is anti-Canadian and somehow sympathetic to far-right US President Donald Trump.

But after suggesting her opponents “stand with Donald Trump” and stating no one should be “taking money” from those who “financially support” people “who want to slap duties on our lumber,” guess what?

Surprise, surprise  – it looks like Clark’s BC Liberals are the ones who are actually “taking money” from foreign entities that want to “slap duties” on BC lumber and others who have business dealings with Donald Trump.

Records from Elections BC show Clark’s BC Liberals received a grand total of $477,000 in foreign donations from a US company that is leading the charge to impose tariffs on Canadian softwood lumber as well as a company that owns Vancouver’s Trump Tower.

Under the province’s “Wild West” campaign finance laws, British Columbia is one of only a small number of jurisdictions in the world that allows donations from foreign individuals and corporations seeking to influence domestic politics. Clark’s BC Liberals have collected a staggering $1.2 million in out-of-province donations since only 2015.

In total, Clark’s BC Liberals have received $241,000 from Weyerhaeuser, the largest softwood lumber producer in the United States.

In a statement, the BC NDP charged “Weyerhaeuser has not only shuttered or sold 10 BC mills over the past 16 years, but their US parent company has been leading the fight to impose unfair duties on Canadian softwood lumber that will kill BC forestry jobs.”

Weyerhaeuser is a key member of an American lumber industry lobby group that launched multiple petitions calling for duties on Canadian softwood lumber in November 2016 – yet Clark’s BC Liberals continued pocketing donations from the same company as recently as March 25, 2017:

And while Clark and her surrogates have attempted to draw spurious and bizarre connections between the NDP and Trump, records from Elections BC also show Clark’s BC Liberals received an additional quarter of a million dollars from the same developer that owns Vancouver’s controversial Trump Tower.

Malaysia’s Holborn Holdings, once identified by the Vancouver Sun as an example of how “foreign money poses a threat to BC democracy,” has donated $236,000 to the BC Liberals, including a $50,000 donation reportedly given at a private dinner in February 2016 attended by Clark and BC Housing Minister Rich Coleman.

After Trump first announced his plans for a Muslim ban in 2015, Clark shrugged off growing calls to strip the name “Trump” from the building, suggesting the matter was purely a “business decision.”

Although Clark now claims she disapproves of “taking money” from people who “financially support” Trump, the BC Liberal donor currently pays the Trump Organization both for naming rights and to directly manage Trump Tower Vancouver.

During an interview with Vancouver’s OMNI Television in 2014, Trump Jr. bragged they were seeking international buyers from “quite a few different countries” to buy units in the new tower. The same real estate developer is at the centre of another controversy involving the BC Liberals – in 2007, the BC government shut down the Little Mountain social housing complex and sold the publicly-owned land to the BC Liberal donor.

Although even the New York Times has suggested there is a uniquely “cozy relationship between private interests and government officials in the province,” during a campaign event Monday, Clark suggested that hundreds of thousands of dollars in corporate money pouring into the BC Liberals war chest has no influence on her because she chooses not to let it influence her.

“I mean, everybody takes donations,” Clark said. “The thing is, does the donation change your decision?”

The BC NDP has called for a ban on corporate and union donations, but the BC Liberals won’t commit to doing the same – Clark’s spokesperson suggested earlier this year that reforms weren’t necessary because BC has “a system that works.”

A report released Tuesday by a BC watchdog group found 177 BC Liberal donors that gave the party $55 million over a decade received over $15 billion in government contracts, projects and other payouts.