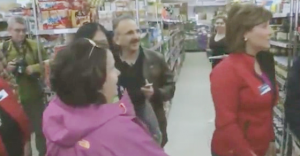 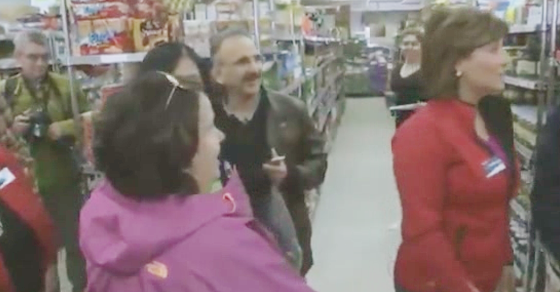 Christy Clark literally turned her back on a voter, British Columbians are calling her ‘arrogant’

The hashtag "#IamLinda" trended across Twitter as British Columbians told Linda they know how it feels to be disrespected by Christy Clark.

No wonder polls show Christy Clark is the “most disliked” leader in British Columbia.

One voter in North Vancouver learned the hard way what happens when you decide to speak your mind rather than let yourself be used as a prop in a Christy Clark photo-op:

A moment from the campaign trail: “I would never vote for you.” And @christyclarkbc replies, “That’s why we live in a democracy.” #BCVotes pic.twitter.com/4mzqzP00Hr

As Clark and several BC Liberal candidates wandered through the produce section at a local grocery store Thursday afternoon shaking hands with shoppers, one voter who introduced herself as “Linda” made the mistake of going off-message:

“Hi Christy. I’m Linda. I would never vote for you because…”

Before Linda could finish her sentence, Clark grabbed Linda’s arm and interrupted her:

“You don’t have to. That’s why we live in a democracy.”

Clark then turned her back to Linda and walked away.

Too bad Linda isn’t a foreign corporation with a quarter of a million dollars on hand – Clark might have bothered listening to her concerns.

That’s because interrupting a voter and dismissing their concerns at a photo op seems like an unusual choice for a politician seeking re-election, as many observers later noted:

@cbcnewsbc @christyclarkbc The disdain Clark shows here for a BC voter is palpable. She works for us.

What strikes me most is Clark spoke over her without listening to her reasons why. #bcelxn17 https://t.co/QYj6pKm4WD

And it turns out many people felt like they could relate with Linda’s feelings of being disrespected and ignored by Christy Clark.

By Thursday evening, #IamLinda became one of the most popular hashtags in Canada as British Columbians took to Twitter to tell Linda they know how it feels too:

Here’s a few examples of what they said:

#IamLinda because Premier Clark won’t speak to me either….. ? #bcelxn17

For all of @ChristyClarkBC‘s chatter about Anger Management, she should look at her own Arrogance Management issues. #bcpoli #bcelxn17 https://t.co/qmtsf2pEIs

Linda isn’t the type to write a $10,000 cheque for special access.
Christy hasn’t been paid to talk to her so move on quickly. #bcpoli https://t.co/2MKQzfaNiE

This is one of the risks of being out of touch Premier who works for $$$$ corporate donors + no one else #bcelxn17 #bcpoli #iamlinda https://t.co/xqxSbPSNSk

This woman is my hero. I can’t even dream of owning a home thanks to @bcliberals policy #IamLinda https://t.co/ifvZRUbLJd

#IAmLinda because I shouldn’t be working 48+ hours every week and still be unable to afford to rent a decent apartment in Surrey! #bcelxn17

#IamLinda, because I want a BC Premier who cares enough to listen to my concerns, not just use me as a prop in her photo op https://t.co/ryklS8qksr

Many have to work 2-3 jobs without benefits just to get by in the Lower Mainland. #IamLinda & not buying Clark’s bshttps://t.co/r7ZA1TmeQT pic.twitter.com/E6NCXS0rYm

#IamLinda because the BC Liberals ignored the housing crisis in Vancouver for years before taking any action. #bcpoli

#IamLinda because I can’t stand CC lying to BCers all the damn time. No I don’t believe U care about low income housing or the people.

#IAmLinda because Christy Clark doesn’t care about renters and low wage earners like me.

#IamLinda because I make $9.60/hour with a University education. You’ll never have my vote @christyclarkbc Only 11 days to a #BetterBC

#IAmLinda because I’m tired of being nickled and dimed to death while Christy’s friends get one free ride after another.

#IamLinda because I’m a teacher & propping up an underfunded education system while the government attacks me is exhausting. #bcelxn17 #bced https://t.co/1963b1LokS

Well, “thank goodness” we live in a democracy – British Columbians go to the polls on May 9th.