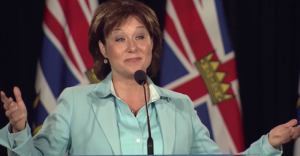 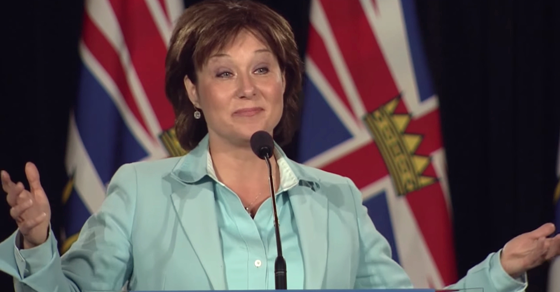 Christy Clark’s BC Liberals received over $1.2 million from corporations outside BC since 2015

No wonder the New York Times calls BC the "Wild West" of political fundraising.

Well, the New York Times compares the situation in BC to the “Wild West,” while the Globe and Mail’s editorial board notes that “the perception that corporate money is influencing government decisions is impossible to avoid.”

Want some hard numbers to back that up?

Not only have BC’s loose laws around politics and corporate money allowed the governing BC Liberals to pocket five and a half million dollars from corporations in just two years – a staggering $1.2 million comes from corporations headquartered outside the province.

According to an analysis of Elections BC records by PressProgress, one in five corporate dollars flowing into BC Premier Christy Clark’s war chest since 2015 has come from corporate donors outside BC.

BC is one of only a few remaining provinces that still places no limits on corporate donations – aside from Saskatchewan, PEI, Newfoundland and BC, all other provinces have capped corporate donations or banned them outright. Plus, not only does BC allow out-of-province donations, it’s one of a small number of jurisdictions in the world that allows donations from foreign individuals and corporations too.

Companies in Manitoba and Saskatchewan contributed a combined $7,350 to the BC Liberals. A further breakdown by industry might help explain why.

According to Elections BC data, one-in-five (22.6%) out-of-province corporate donations to the BC Liberals came from companies linked to natural resources – over a quarter of a million dollars in all.

Out-of-province companies linked to financial services (7.7%), real estate and construction (6.2%), pharmaceuticals (5%) and lobby firms (4.5%) combined for nearly $300,000 in corporate donations to the BC Liberals. And you don’t have to look hard to get “the perception that corporate money is influencing government decisions” in BC:

• Clark’s BC Liberals have handed out hundreds of millions of dollars worth of subsidies and tax breaks to oil and gas companies, in some cases benefiting corporations that “have been major donors to the BC Liberal Party.”

• In 2013, Clark said she was “concerned” about “public safety” when it came to selling beer and wine in BC grocery stores. But not long after, Clark’s government allowed liquor sales in grocery stores anyway.

That might make you think back to 2010, when the BC Liberals received $300,000 from liquor companies in one day only weeks before they made “substantial changes” to BC’s Liquor Control and Licensing Act.

• After an apparent intervention by Christy Clark’s office, eight researchers from the BC Ministry of Health’s pharmaceuticals division were fired amid allegations they breached the privacy of patients. Clark’s government claimed the police were investigating the matter, but it was later revealed no police investigation had ever existed. One of the fired researchers alleges in court documents that the dismissals were an attempt to protect “large pharmaceutical companies, many of whom were major contributors to the Liberal Party.”

Meanwhile, the researchers have found themselves unable to work and one committed suicide. A final report from BC’s Ombudsperson is expected to be released later this week.

• And while years of soaring housing prices have been good for real estate developers, it hasn’t been so good if you’re a working family that can’t afford a million dollar condo.