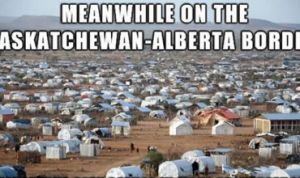 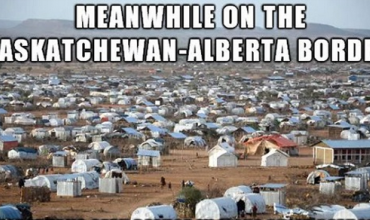 Can the results of the Alberta election be compared to a refugee camp in Ethiopia with over 40,000 Somali refugees? Well, the Manning Centre and its charitable arm gave it a shot in a bizarre e-mail blast. The Manning Centre, a right-wing think tank founded by Preston Manning, sent the email to supporters on behalf of […]

Can the results of the Alberta election be compared to a refugee camp in Ethiopia with over 40,000 Somali refugees?

Well, the Manning Centre and its charitable arm gave it a shot in a bizarre e-mail blast.

The Manning Centre, a right-wing think tank founded by Preston Manning, sent the email to supporters on behalf of the Editor of the C2C Journal, an online publication of the Manning Foundation for Democratic Education.

The Manning Centre is a non-profit that focuses on “political, conservative-oriented activities” while the Manning Foundation is a registered charity that conducts “research and education” as part of the conservative movement under the Manning brand. The article is authored by the Manning Centre’s Director of Strategic Communications, who describes himself as “a conservative refugee from 16 years of NDP government in Manitoba.” Colin Craig also connects the “darkly satirical photo” of an actual refugee camp to the “economic carnage” he imagines is already underway nine days after the Alberta election.

“The barbarians have breached the gates and are now in a position to throw socialist wrenches into the gears of Canada’s economic engine. Albertans can’t afford two terms with the NDP while squabbles continue at the grassroots level. For that matter, Canada can’t afford it either.”

Want proof? “The day after the NDP swept to power in Alberta the TSX dropped by over 150 points” and “investment guru Kevin O’Leary compared the NDP’s victory to a ‘horror movie unfolding,” writes Craig.

(The following day, on May 15, the TSX gained “as a broad rally led by oil and gas, mining, and industrial stocks offset weakness among large-cap banks and insurers.” Meanwhile, Kevin O’Leary bombed on Celebrity Jeopardy.)

The image used by Craig can be traced back to the Jesuit Refugee Service, an America-based organization that provides health, education and emergency services for refugees and advocates for the rights of forcibly displaced people around the globe. It depicts the Melkadida refugee camp in southeastern Ethiopia.

According to the most recently available United Nations data, the refugee camp is home to 43,531 Somalians displaced by civil war — 68% (close to 30,000) are children and youth 17 years old and younger: Under Canada Revenue Agency rules, charities are permitted to spend up to 10% of their expenses on political activities. They are also prohibited from engaging in “partisan” activity, defined as “direct or indirect support of, or opposition to, any political party or candidate for public office.”

According to the Manning Foundation’s latest filings (2013), it spent 0% of its budget on “political activities” (the charity’s “charitable program” expenses also totaled 0%). Here is what CRA’s own chart looks like: