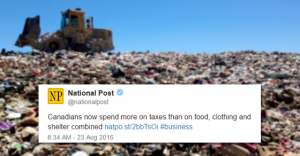 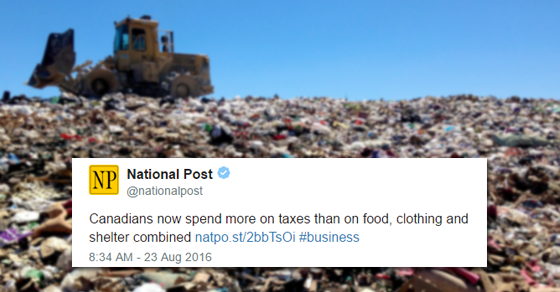 Headlines across Canada on Tuesday declared “Canadians now spend more on taxes than on food, clothing and shelter combined” after the Canadian Press reported on an annual study from the right-wing think tank, a story that ran in major outlets like CBC, Globe and Mail, Financial Post, Toronto Sun and Global News.

You might wonder why that story didn’t include any counterpoints or get run through a critical filter – after all, people do step forward with valid criticism when the Fraser Institute publishes versions of the same report year after year.

Here are just a few examples:

1. In 2010, the Canadian Centre for Policy Alternatives explained in detail how the Fraser Institute’s report “overstates average taxes and ignores the introduction of new public services during the past half-century.”

2. Writing in the Globe and Mail in 2013, Broadbent Institute senior policy adviser Andrew Jackson noted one reason taxes were lower in 1961 is because “Canadians had no Medicare, no Canada Pension Plan, no Guaranteed Income Supplement to old age pensions, and only a tiny post-secondary educational system.”

3. In 2014, former Walrus editor John McFarlane highlighted the Fraser Institute’s “bias in its definition of taxes, in terms of what it included in its calculation of the average tax bill,” asking if it’s “reasonable to include corporate taxes in the total that Canadian families pay?”

Another good reason to ask questions is sometimes people jump to absurd conclusions – take the Toronto Sun editorial board, for example, who sound like the Fraser Institute’s study has made them paranoid about working-class tax revolts:

“Regardless of who is in power, the people always wind up being taxed more. This has to change. It’s time for taxes to come down. Soon the average hardworking person won’t be able to take it anymore.”

Luckily, the Fraser Institute’s own charts do a good job showing why the Toronto Sun’s fears have literally no basis in truth or reality:

Kudos, I guess, for squeezing a “taxes are at historic highs!” conclusion from this data. https://t.co/hTIHICkdig pic.twitter.com/Nja9T0mOXG

As the CCPA’s Iglika Ivanova pointed out last year, taxes have “significantly declined” since the 1990s:

“Taxes are actually lower now than they have been during most of the last 30 years—a fact highlighted in Figure 4 of the report, which doesn’t quite fit with the message of a ‘ballooning’ tax bill. OECD research confirms this: Canadian taxes as a share of our economy (GDP) increased in 1960s and 70s when new programs were put in place, and have significantly declined since the late 1990s (by about 5%).”

Although the Fraser Institute claims the average family spends 42% of its income on taxes, less than one-third of that number actually refers to federal and provincial income tax.

The Fraser Institute inflates its numbers by tacking on average costs for health insurance, pensions and employment insurance (as if they’re all one in the same thing) and further pads their numbers by including corporate taxes and oil and gas royalties for some reason. Is this the only way to calculate the tax bill of the “average Canadian family”?

According to a “related stories” link embedded on the CP story that appears on CBC’s website, earlier this year CBC published another story showing the same family pays as much as two-thirds less than what the Fraser Institute claims they pay in taxes.

So, that’s one example. Fraser Institute defends their curious methodological choices by arguing “the cost of business taxation is ultimately passed onto ordinary Canadians.”

Is that true? To the extent that taxes on corporate profits are passed along to anyone, a US study shows four-fifths of the corporate tax burden would be passed onto income earners in the top 20% – in other words, even by the Fraser Institute’s own logic, it’s not being passed on to the “average Canadian family.”

And let’s not forget: the services paid for with our tax dollars also make important contributions to society and save people a fortune.

What’s it going to take to get a little fact-checking around here?