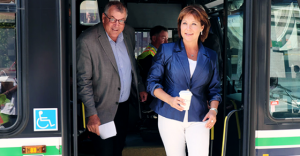 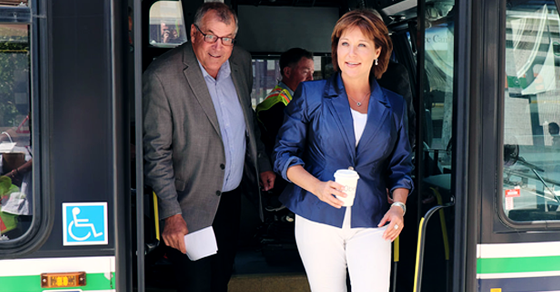 Why is BC Premier Christy Clark clawing back benefits for the disabled?

So why is BC Premier Christy Clark clawing back benefits for the disabled?

Clark’s BC Liberal government just made it harder for 55,000 British Columbians living with disabilities to get around – despite facing a greater likelihood of unemployment and poverty.

The changes, which have led to 3,500 disabled British Columbians giving up their bus passes, is being described as “cold hearted.”

Previously, disabled British Columbians received bus passes at a reduced cost of $45 per year while others were eligible for a $66 per month Special Transportation Subsidy for those unable to use public transit due to their disability.

Now, Clark’s raising prices on bus passes from $45 per year to $624 per year (plus an annual $45 “administration fee”) and the Special Transportation Subsidy has been eliminated altogether.

Clark’s government claims they’re making up the difference by boosting assistance by $77 per month, except the BC Liberals haven’t increased that assistance since 2007 – after inflation, benefits for disabled British Columbians end up 14% lower than they were a decade ago.

Plus Clark increased the cost of a bus pass to $624 per year.

Clark’s Minister of Social Development claims the changes give disabled British Columbians more “choice,” but as one disability advocacy group points out:

“The rates are so shamefully low, we know what people will do with that money…They’ll pay their rent or they’ll eat. When you’re living on that kind of money, there’s no choice.”

And a new study published by the Institute for Research on Public Policy underlines why cuts to disability assistance only serve to create barriers for British Columbians with disabilities from participating in the labour market.

Currently 411,600 Canadians with either physical or mental disabilities find themselves unemployed despite actively looking for work, and the report identifies lack of access to transportation as a key barrier for reducing this unemployment gap:

“The employment gap between people with and without disabilities would greatly narrow and might effectively disappear … where investments have been made to enable people with disabilities to have better education, avoid local transportation difficulties and to receive the needed personal help in everyday activities and/or the aids/devices they require.”

Those additional barriers mean a greater number of people with disabilities will struggling with poverty.

Here are a few additional statistics showing what’s at stake. However, poverty rates among visible minorities and Indigenous individuals with disabilities are disproportionately higher.

That includes nearly four-in-ten Aboriginal persons with disability find themselves in poverty: