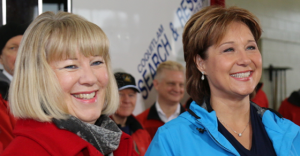 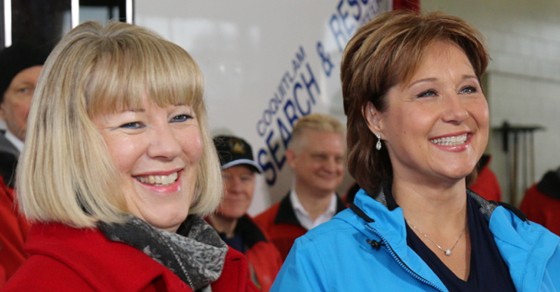 BC Liberal candidate Linda Reimer's comments on privatizing BC's healthcare system and the fentanyl crisis caused the audience to gasp out loud.

Incumbent BC Liberal candidate Linda Reimer seems to have a knack for making rooms full of voters gasp out loud.

During a debate hosted by the Tri-Cities Chamber of Commerce in the BC riding of Port Moody-Coquitlam Thursday night, Reimer surprised many when she said she supports privatizing healthcare “for those who are able to afford it” – in other words, the wealthy:

In response, BC NDP candidate Rick Glumac blasted Reimer’s support for two-tier healthcare, arguing that prioritizing patients “just because they have more money” goes against “my Canadian values”:

“That right there, if there’s no other reason to not vote Liberal, that’s it right there because that is frightening.”

Glumac pointed to Dr. Brian Day’s ongoing constitutional challenge against the public healthcare system that is bankrolled by a right-wing special interest group, suggesting British Columbians need to know their representatives are prepared to stand up for public healthcare.

Reimer’s comments triggered a response from the BC NDP who released a statement Friday stating “Christy Clark’s own MLAs and their rich donors are skipping the line because they can afford to pay out of pocket” and notes that cutbacks and understaffing in BC hospitals has been moving the province “towards a US-style private healthcare system.”

Whatever the candidate running under Christy Clark might think, the evidence is clear that introducing private services degrades the overall quality of the public healthcare system by siphoning away staff and resources.

And Reimer’s out-of-touch thoughts about public health didn’t end there.

On the topic of the province’s fentanyl crisis, the BC Liberal candidate said she was surprised to learn “some of these people are just recreational drug users.”

To audible gasps from the audience, Reimer added that fentanyl users are “not the people on the Downtown Eastside” and “didn’t come from Riverview” either – a reference to a mental health hospital shut down by the BC Liberal government in 2012:

“So, the fentanyl crisis has been a huge challenge and there’s been so many horrible, tragic stories coming out of this and I guess a surprising thing for me was that some of these people are just recreational drug users. They’re not the people on the downtown east-side. And by the way, the people on the downtown east-side, they didn’t come from Riverview, they’re young people.”

BC’s fentanyl crisis has seen over one thousand lives lost due to illicit drug overdoses since 2016, including the deaths of 229 British Columbians since the beginning of 2017.