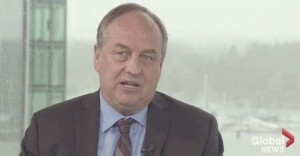 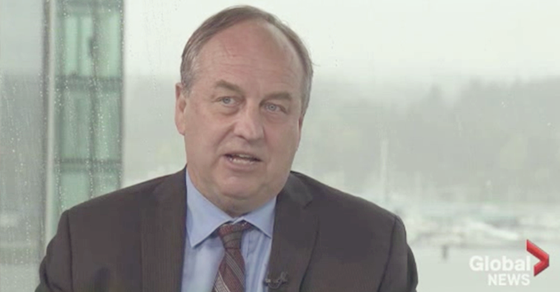 BC's Green leader is leaving everyone scratching their heads after a pair of interviews this week where he suggested he's open to propping up Christy Clark's BC Liberal government.

BC Green Party leader Andrew Weaver is leaving a lot of people scratching their heads after hinting in a pair of interviews this week he’s open to propping up Christy Clark’s BC Liberals in the event of a minority government – the same party Weaver accused only last month of “selling out to corporate and foreign interests” and moving BC “backwards” on climate change.

During an interview on Global BC Wednesday night, Weaver argued no party should win a “majority government,” begging an important follow-up question: who does the aspiring kingmaker feel “comfortable” working with?

Pretty easy answer: definitely not the “climate laggard” who “makes British Columbia look like a pack of fools on the international scene,” right?

And yet we are left with the strange spectacle of Weaver sitting in silence, shaking his head for several seconds, before confessing to Global News’ Keith Baldrey: “you’re putting me on the spot.”

In a sputtering response that didn’t once mention policy or words like “climate change” or “clean energy,” Weaver refused to reveal who his party would support.

Instead, he talked about all the things he doesn’t like about BC NDP leader John Horgan’s personality (Weaver claims he feels personally threatened by him) and praised Christy Clark for her courteous and “respectful” tone (top journalists say her campaign has devolved into “lies” and “conspiracy theories” after running a smear campaign targeting an innocent voter named Linda over the last week):

“Whereas the Premier, you can have a respectful disagreement in a one-on-one conversation and it’s not personal.”

A “firestorm” erupted after the video aired and Global News looks like they were haggled into editing their headline, though as the Vancouver Sun points out, the issue remains that Weaver still “refused to give a definitive answer.”

So Weaver decided to add more fuel to the fire.

Asked by Vancouver’s CKNW AM980 what he’ll do if the BC Greens “hold the balance of power” following next week’s election, Weaver said on Thursday he would be “open” to accepting a cabinet position from whichever party that wins the election – possibly even a cabinet post under Christy Clark’s BC Liberals:

All in all, pretty odd responses that raise more questions than they answer.

Hard to imagine many climate voters being happy about being used to prop up a party that is literally bankrolled by oil, mining and gas companies for another four years judging by these comments on Twitter:

And also consider any of the following:

• When Clark’s government finally unveiled its plan to tackle climate change, the final product was so watered down and warped that Clark’s own climate experts who proposed recommendations called the plan “pathetic and cowardly.”

• Clark’s government is easily the most friendly with big oil and mining companies – records show that between 2010-2016, lobbyists made over ten thousand contacts on behalf of a handful of companies that flushed millions and millions of dollars into the BC Liberals’ war chest.

• At the same time, Clark’s government has given out $15 billion in subsidies, public contracts and other payouts to a small handful of companies that gave the BC Liberals $55 million over a decade – a recent report by the Sierra Club suggests the BC Liberals are set to give away another $8 billion in subsidies to oil and gas companies, including projects related to LNG or the Site C dam.

• Even David Suzuki, who has endorsed Weaver’s Greens, has suggested Clark is not “serious” about climate change.

How is this even a hard question for Andrew Weaver?