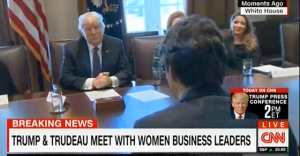 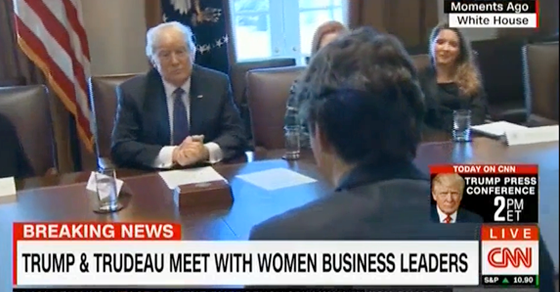 Coyne ripped into Trudeau for organizing a photo-op with Trump promoting "women in the workforce."

Considering the White House thinks his name is “Joe Trudeau,” was Justin Trudeau’s conciliatory diplomacy really worth it?

According to some journalists: no.

With U.S. President Donald Trump’s Oval Office in chaos over his national security adviser’s connections to Russia (he resigned later that night) and facing a growing resistance outside (and maybe inside) the White House, Prime Minister Trudeau offered Trump’s beleaguered three-week presidency a refreshing change of pace during their first meeting Monday in Washington.

Namely, a photo-op promoting “women in the workforce”:

If the thought of Trump talking about “empowering women” seems like a sign you’ve officially entered the twilight zone, that’s because it’s exactly where we all are right now.

Trudeau and Trump are doing a roundtable about the advancement of women in business. Trump’s thoughts in 1994 about his wife working: pic.twitter.com/qsahkHUkGD

• Trump signed an executive order banning foreign aid to groups that discuss abortion with women and has stated that “Planned Parenthood should absolutely be defunded.”

• Trump has questioned the existence of a gender pay gap and has suggested the idea of equal pay sounds like a “socialistic society,” but it doesn’t matter because he sometimes pays his female employees very well. Although he’s currently being sued by female campaign staff for discriminatory practices when it comes to paying women less than men.

• And many, many more examples.

Coyne tweeted that images of Trump spouting “pro-women rhetoric” next to a smiling “feminist” prime minister serves no purpose other than “normalizing” Trump – and he ripped into Trudeau for sanitizing the reputation of an alleged “serial sexual assaulter” too:

The joint roundtable with women biz leaders was a nice photo op; will help people forget Trump’s record as a serial groper. https://t.co/WFUI6kwLuw

If helping Trump sanitize his reputation is your goal… https://t.co/ny7nWQh284

And it’s worth remembering, the idea for the “pro-women” photo-op didn’t come from Trump’s White House – it came directly from Trudeau’s office.

As the Associated Press reported over the weekend:

“A White House official said the two countries would launch a new task force called the United States Canada Council for the Advancement of Women Business Leaders-Female Entrepreneurs. The official said Trudeau’s office reached out to discuss working on a joint effort, noting that this was seen as an area of shared interest between both leaders.”

And also consider these observations from Macleans’ Anne Kingston:

“It’s telling how much of the agenda was designed to flatter Trump … [Trudeau] did extend his feminist cred to burnish a bilateral roundtable on women and business. And that abetted Trump … The White House wants to identify him as a champion of women.”

But what else could Trudeau have done? Well, he could have chosen not to “flatter Trump” on this specific issue or use his “feminist cred” to help Trump portray himself as a “champion of women.”

Because sure enough, that’s exactly what Trump did:

Wonderful meeting with Canadian PM @JustinTrudeau and a group of leading CEO’s & business women from Canada??and the United States?? pic.twitter.com/Rxr31QpxMK

Trump talks about the “full power of women” and gets a first smile from Trudeau.

And while it’s undoubtedly a positive gesture, Oxfam Canada Executive Director Julie Delahanty points out the initiative doesn’t address issues that are immediately relevant to many women:

On the other hand, some observers said it was “a smart thing” for Trudeau to propose the photo-op as it gives Canada an edge on trade negotiations at a time when Trump is antagonizing Mexico.

“It takes attention off of NAFTA,” one observer told the Canadian Press. “And from Trump’s point of view, it contributes to softening Trump’s image, and he’s got a problem with women.”

Trump has been accused of sexually assaulting over a dozen women.

In January, an estimated 4.2 million Americans participated in women’s marches – believed to be the largest demonstration in U.S. history.