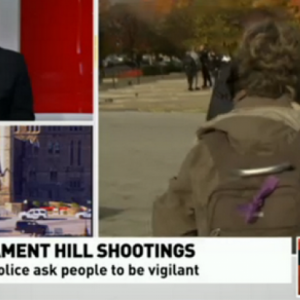 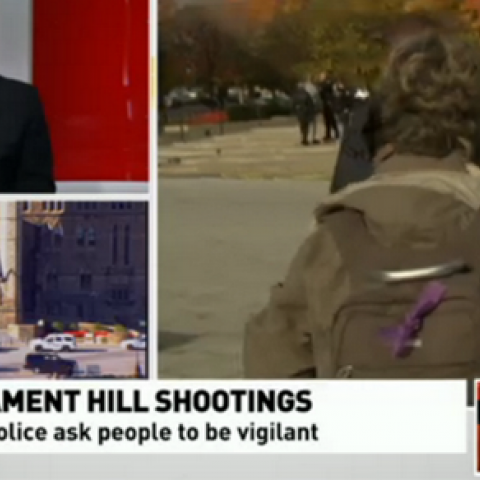 Having reliable information in the middle of a national emergency is a good reminder of the value of responsible public broadcasting. Media critics from the (often) sensational and over-the-top American media landscape are offering high compliments to CBC for what Time describes as their “nonhysterical, fact-based live broadcasts” of Wednesday’s shooting at the National War Memorial and […]

Having reliable information in the middle of a national emergency is a good reminder of the value of responsible public broadcasting.

Media critics from the (often) sensational and over-the-top American media landscape are offering high compliments to CBC for what Time describes as their “nonhysterical, fact-based live broadcasts” of Wednesday’s shooting at the National War Memorial and on Parliament Hill.

“Anchored by the unflappable Peter Mansbridge, news of the shootings in Ottawa unfolded live on the CBC much like they do here in the United States: lots of sketchy details, conflicting reports, unreliable witnesses, and a thick fog of confusion. All of that was familiar. What was less familiar was how Mansbridge and his team managed that confusion, conveying a concise and fact-based version of fast-moving events to viewers across Canada and the world.”

“Mansbridge, in sharp contrast to the frenetic, breathless delivery we’ve come to expect from American news anchors in times of breaking news (including stories of far less significance than the attacks in Canada), was thoughtful, took his time, and seemed at times to pause, and to consider his words before speaking. Just. Imagine. That.

Around 1:30 ET, three-and-a-half hours into his coverage, Mansbridge paused to update viewers. ‘What do we know with certainty right now?’ There was no place for exaggeration, rumor, or mistakes. It was like watching grown-up news. And suddenly, seeing it, I was struck by how often we don’t see it here in the U.S. It’s been a long time since American anchors like Frank Reynolds said, ‘let’s nail it down…let’s get it right.'”

“Note the calm tone and lack over loud, overly confident graphics as Mansbridge warns against following scurrilous rumors. It’s a far cry from that time a CNN reporter pointed out how “interesting” it was that a dog was barking during the shootout that following the Boston Marathon bombing.”

That stands in stark contrast with CNN’s coverage, whose “sensational coverage” was criticized by many, including the UK’s Telegraph.

At one point in the day, CNN incorrectly reported that “multiple shooters” were involved in the attack — something that undoubtedly contributed to “confusion and fear” at a time when authorities were not providing “hard information that might have reassured terrified citizens,” as the National Post’s Kelly McParland and Michael Den Tandt point out.

The Vox summed up the contrast between CBC’s “sober, informative approach to an ongoing crisis” compared with the “panic” of CNN in “one very revealing screenshot”: