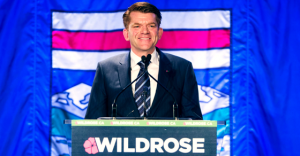 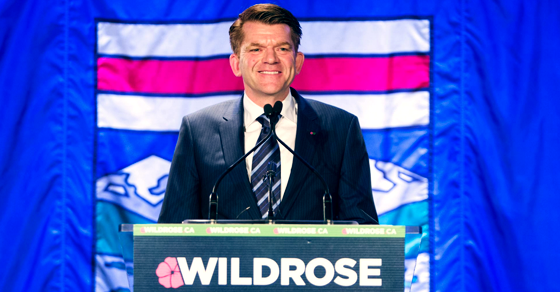 What's the most outlandish policy Alberta's Wildrose Party is debating at its Annual General Meeting this year?

What’s the most outlandish policy Alberta’s Wildrose Party is debating at its Annual General Meeting this year?

Is it pushing for private “competition and choice” in health care? (Yes, they’re proposing that). A proposal that describes heads of students’ unions as “socialist bureaucrats”? (Oh, they’re talking about that too).

Nope, the grand prize goes to Wildrose members in MLA Derek Fildebrandt’s Strathmore-Brooks riding who would like to see the federal government impose financial penalties on any province that does anything to “discourage economic activity” or “limit responsible resource development”:

It’s a bit like taking Ralph Klein’s snappy slogan about letting the “eastern bastards freeze in the dark” and imagining he meant that literally.

The Wildrose guide to proposed policy amendments elaborates on the rationale behind this idea:

“Canadians and Albertans would be better served by an equalization formula that encourages and rewards fiscal prudence and responsible resource development rather than a system that encourages policies that have the reverse effects.”

And the vague language of the proposal only raises questions about what types of policies Wildrose thinks discourages and limits economic activity and resource development in the first place:

• If a province decides it would like safety and environmental concerns to be addressed by a pipeline running through their jurisdiction, would that be considered placing a “limit” on resource development? (What would right-wing premiers like Christy Clark say about that?)

• If a province brings in any environmental, health or safety regulations impacting oil, gas and mining developments, does that put a “limit” on resource development?

• Or if a province passes or upholds labour laws or workplace safety regulations, would Wildrose say that discourages economic activity?

Maybe? The proposed policy is so vague and open-ended, it could apply to nearly any policy decision provinces might make in the name of protecting the health, safety and general well-being of its people that don’t line-up neatly with business interests.

The Government of Canada’s equalization program is how the federal government helps less prosperous provinces “provide reasonably comparable levels of public services” which they would not be able to afford otherwise. This funding is “unconditional” and “provinces are free to spend the funds according to their own priorities.”

But as it stands, equalization funding is already tied to Canada’s economic growth on a “three-year moving average of gross domestic product (GDP) growth.”

And although there is literally zero chance Wildrose would every actually be able to impose these conditions on their own because equalization falls under federal jurisdiction, it might rub other provinces the wrong way.

Because it sounds like what they’re saying is they’d like the federal government to tell provincial governments what they can and can’t do.