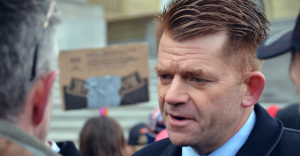 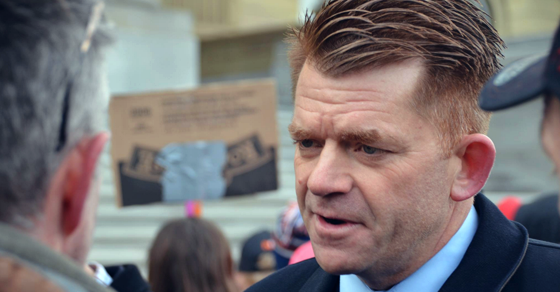 Has Alberta's Wildrose Party created a monster it can't control?

Has Alberta’s Wildrose Party created a monster it can’t control?

Stand Up for Alberta, a right-wing activist group responsible for organizing several rallies at the Alberta Legislature, posted a message on its Facebook page this week criticizing Wildrose leader Brian Jean’s recent call for “calm” and accusing Wildrose Party brass of exploiting their work.

“Since when did pleading for political calm by the leader of the opposition mean bending knee to the NDP govt,” reads the message posted in the groups name and signed by page administrator Lee Thompson.

“God forbid that our official opposition might actually go on the attack instead of using the current political unrest in Alberta as a campaign tactic.”

Last week, Jean issued a statement to Wildrose supporters condemning “threats of violence” after a series of threats against Premier Notley were posted on social media:

We unequivocally condemn any threats of violence. Political debate should never degenerate to threats https://t.co/LBBUwiJThF #ableg

Jean tries to quell the uttering of death threats on his FB page. Everyone who responds is like “but…” #ableg pic.twitter.com/0HZRzSDj51

Jean spoke at an event organized by Stand Up for Alberta on November 30th – he’s currently using a photo from the same event as his Facebook page’s cover photo:

The group’s message also alludes to a controversy brewing behind the scenes between activists and party brass over who will control a list of names, addresses, e-mails and phone numbers collected during an upcoming petition drive attempting to force a plebiscite.

“It is for the people of Alberta and not some political party that is using the movement for furthering its cause,” the message states. “One does not need any other political party involvement.”

The message complains how Wildrose “MLAs blow into town” during Stand Up for Alberta events and “speak totally unprepared and nod and pay lip service to the people of Alberta with no real answers.”

“Our people that lead the rallys … are at the forefront work tirelessly, endlessly to bring the message home to the people of Alberta and do so with little recognition, paying their expenses out of their own pocket.”