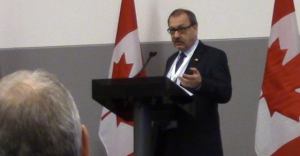 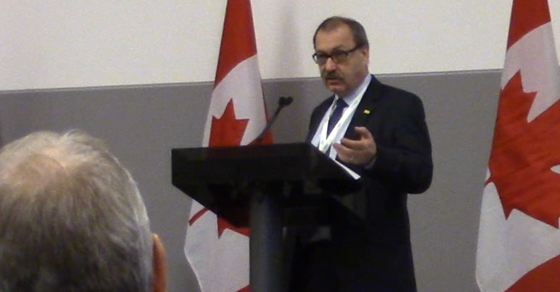 Alberta PC leader: “The less employees that don’t have the right to strike, the better” (VIDEO)

McIver had an interesting response to a panelist from the Fraser Institute, who suggested unions are holding governments "for ransom."

What is the interim leader of Alberta’s Progressive Conservative Party up to this weekend?

Sleepovers at Stornoway? Mingling with Wildrose leader Brian Jean at cocktail parties? Talking about uniting the right? Yes, yes and yes, but PC leader Ric McIver also took time out of his busy schedule to tell working Canadians how he really feels about their “right to strike.”

Moderating a panel titled “Labour Pains: How to improve fairness for taxpayers” at the Manning Centre Conference Saturday in Ottawa, McIver had an interesting response to a panelist from the Fraser Institute, who suggested unions are holding governments “for ransom.”

“I always felt that, you know what, the less employees that don’t have the right to strike, the better,” McIver replied.

That wasn’t the only idea incubated by the panel.

Fraser Institute fiscal studies director Charles Lammam floated the idea of getting rid of collective bargaining in the public sector and replacing it with something called a “wage board” to effectively drive down workers’ wages.

“Having this mechanism rather than collective bargaining and other types of political determinants setting the wages, we have something that’s a bit more objective and removed,” Lammam explained.

But when Winnipeg city councillor Jeff Browaty brought up the challenge of addressing “collective agreements with our emergency services,” namely how the public loves first responders who are “supposedly the ones who go running into burning buildings,” Lammam conceded “this is a very tough issue.”

“How do you negotiate down these compensation increases?”

“This is a big issue, particularly with firefighters,” Lammam said. “It’s very difficult to take a stance against a group of public sector workers that have, rightfully, the admiration of a lot of people.”

Luckily, Fraser Institute’s idea of getting rid of collective bargaining and replacing it with a “wage board” could offer a solution.

“This whole idea of wage boards helps get at some of these problems,” Lammam added. “Again, it’s taking the politics out of the compensation setting process.”

Maybe the Fraser Institute thinks the less workers who can negotiate their own wages, the better?