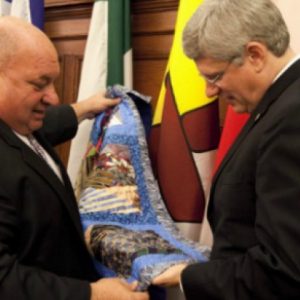 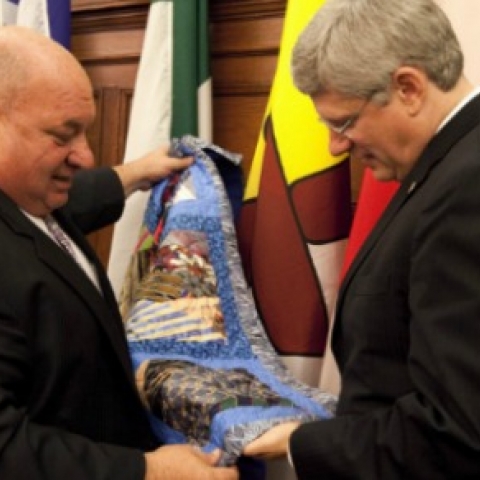 (AUDIO) “Stay the hell where you came from”: Conservative MP shares thoughts on niqab

A Conservative MP took to the airwaves Monday to tell Muslim women to “stay the hell where you came from” if they insist on wearing a niqab. Speaking Monday on a local radio station in his riding of Bruce-Grey-Owen Sound about the niqab controversy (the Conservative government is challenging a Federal Court ruling that struck down the ban on face-covering […]

A Conservative MP took to the airwaves Monday to tell Muslim women to “stay the hell where you came from” if they insist on wearing a niqab.

Speaking Monday on a local radio station in his riding of Bruce-Grey-Owen Sound about the niqab controversy (the Conservative government is challenging a Federal Court ruling that struck down the ban on face-covering niqabs during the citizenship oath), Larry Miller acknowledged it may sound “harsh,” but so be it.

“I think most Canadians feel the same. That’s maybe saying it a little harshly, but it’s the way I feel,” Miller told local radio station CFOS.

“I’m so sick and tired of people wanting to come here because they know it’s a good country and then they want to change things before they even really officially become a Canadian, so I have no sympathy for her.”

Zunera Ishaq, the woman at the centre of the niqab case, has been a permanent resident of Canada since 2008.

Explaining her decision to wear the niqab in the Toronto Star on Monday, Ishaq dismissed Stephen Harper’s apparent claim that she was “oppressed,” and pointed out that although her “own family members have asked me to remove it,” she would “prefer to think” for herself.

“Aside from the religious aspect, I like how it makes me feel: like people have to look beyond what I look like to get to know me. That I don’t have to worry about my physical appearance and can concentrate on my inner self. That it empowers me in this regard.”

Owen Sound Hub, a local news site in Miller’s riding, questioned Miller’s comments, asking “who are ‘most Canadians’ and how do we determine how they feel on this subject?”

Returning to the airwaves later, Miller reported that he had called the police to report that a man, “irate” over with his comments on the radio earlier in the day, walked into his constituency office dressed in “army fatigues” and a “flag wrapped around him.” Miller said the man, who he described as a “typical Caucasian,” said he was a Muslim.

“Miller says the man was upset about what the MP said on the CFOS Open Line show on Monday and the incident scared his staff,” Bayshore Broadcasting reported. “The man was described by staff as Caucasian and did not seem to have an accent.”

The Owen Sound Police Service said no charges have been laid in relation to the office incident, as “there were no threats and the male left when he was told that the MP was not in the office.”

In the second radio interview, Miller also raised the possibility that the man may have been “radicalized,” but he could have simply been “somebody just expressing his displeasure.” Miller said, “if that’s the case, I’m OK with that.”

UPDATE: Miller apologized for his comment in a statement released Tuesday: “I stand by my view that anyone being sworn in as a new citizen of our country must uncover their face. However, I apologize for and retract my comments that went beyond this.”