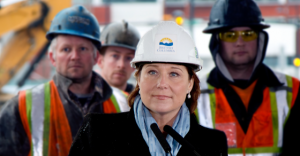 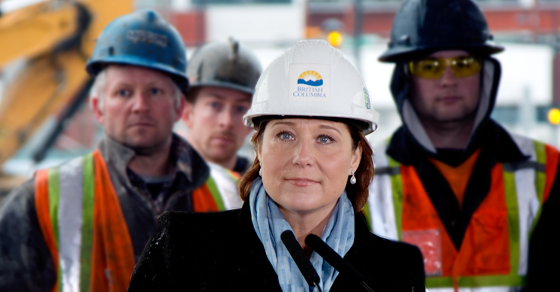 Maybe it's time you consider showing up at BC Liberal fundraising events – BC Premier Christy Clark does, and it's helped her top up her regular salary by over $300,000 since 2011!

Mortgages to pay down? Student loans to pay off?

If so, maybe it’s time you consider showing up at BC Liberal fundraising events – BC Premier Christy Clark does, and it’s helped her top up her regular salary by over $300,000 since 2011!

As the Globe and Mail reported last week, Clark currently receives an extra $50,000 each year for work that includes going to BC Liberal fundraising events. That “stipend” is in addition to her nearly $200,000 annual Premier’s salary, plus all those private jet flights and $3,000 oyster dinners covered by her taxpayer-funded expense account.

Some say that’s a conflict of interest, especially when many of her biggest donors also happen to have a stake in her government’s policy decisions.

Although the average worker in BC earns $46,900 per year, maybe it’s time people working in the following jobs think about how they can get a salary top up from the BC Liberals too?

If you think standing on your feet for hours and hours catering a BC Liberal fundraising event is hard, try washing down a rubber chicken with a glass of room temperature chardonnay! Hard work!

In 2012, Clark made $44,900 attending BC Liberal fundraisers – that’s $19,807 more than the average pay of someone working an accommodation and food services job that same year.

Nothing fishy about this, right?

Although some commercial fishing jobs netted $40,000 per season in 2013 – catching things that may very well have ended up on an hors d’oeuvres tray at a BC Liberal fundraising event – Clark’s salary was topped up by $45,000 for helping reel in cheques from big fish corporate donors.

Sure, BC’s long-term care homes for seniors are understaffed and nurses are overworked.

But by attending things like golf tournaments with corporate donors in 2014, Clark topped up her salary a little over $12,000 more than the average nurse working in residential care earned that year.

Is raising money for the BC Liberals a more important job than raising the next generation of BC leaders?

Apparently! If the starting salary of a teacher in Vancouver is anything to go by, Clark’s fundraising activities in 2015 seems to have been about $5,000 more important too!

With one-in-five children in the province living in poverty and many in the province struggling to afford housing, you can work 40 hours per week year-round and only earn $21,736.

But since Clark has ruled out raising the minimum wage to $15, maybe they should just get a second job like their Premier?

Between now and next year’s BC election, Clark’s second job will earn her $50,000 attending “20 or more of the type of small, intimate gatherings at which people can pay big money to get special access to Ms. Clark.”

Because, hey: why raise the minimum wage when you can raise money for the BC Liberals instead?