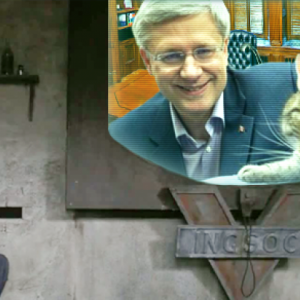 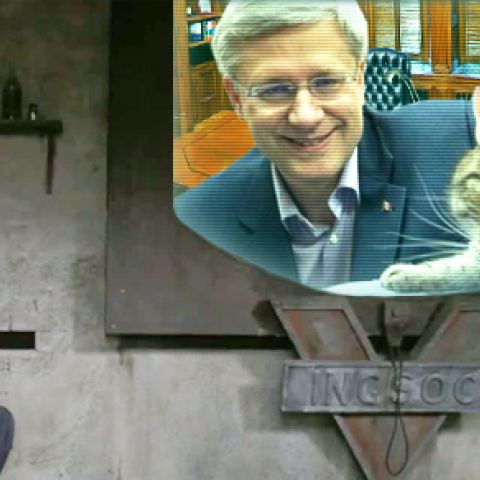 Still think Stephen Harper’s terror bill sounds like a good idea? Forget that four former prime ministers and a handful of Supreme Court justices have openly criticized the bill. And nevermind that 100 legal experts wrote an open letter calling it a “dangerous piece of legislation” that threatens “the health of Canadian democracy” and Canadians’ […]

Forget that four former prime ministers and a handful of Supreme Court justices have openly criticized the bill. And nevermind that 100 legal experts wrote an open letter calling it a “dangerous piece of legislation” that threatens “the health of Canadian democracy” and Canadians’ rights and freedoms.

Here’s what should really scare Harper’s Conservatives: several prominent small-c conservative voices are ringing “alarm bells” over the terror bill — describing it as an overreaching threat to civil liberties.

In a National Post column titled “Alarm bells must ring in response to the government’s new anti-terror bill,” the Right Honourable Lord Black of Crossharbour said “Bill C-51 makes a Swiss cheese out of due process” and lists several “quite troubling” provisions that “create problems on the civil liberties front”:

“All of these steps create problems on the civil liberties front. As presented, Bill C-51 makes a Swiss cheese out of due process, and the three national political parties have approached the problem from distinctly different angles. The government have swaddled themselves in Stephen Harper’s default-toga of protecting the public, aspersing civil liberties concerns, and uttering tired pieties that “the law enforcement agencies are on our side,” presumably referring to their objectives rather than their political preferences.

“It is easy to be cynical about this and resignedly conclude that Vic Toews and Julian Fantino ride again (itself a terrorizing thought, and thought-terror is assumedly covered in the vast sweep of this bill). The government is responsible for preventing terrorist outrages from happening and it has to be given some licence to protect the country and everyone in it. But it is hard to be overly sanguine about the medieval antics of the government that took the giant leap backwards that was the omnibus crime bill. Nor is it reassuring that Mr. Harper, as is his frequent custom, is imposing a shortened debate on Parliament.”

Meanwhile, former Conservative MP Brent Rathgeber has been blogging his concerns about the new bill, which are many. One particular concern is that C-51 will allow police to make preventative arrests and hold individuals for seven days without charges — something Rathgeber says is as impractical and unreasonable as it is draconian:

“The legislation lowers the threshold for preventative detainment from ‘likely to commit’ to ‘may commit an act of terrorism’ and increases the period that individuals, who have not been charged with an offence, can be preventatively detained from three to seven days.

“I might win the lottery tomorrow or I might fly to Mars. Both of those events are equally unlikely but either or both ‘may’ happen. And I question what evidence the authorities can obtain to justify detention or charges in seven days that they could not obtain with diligence in 72 hours.

“Further query if this legislation had been in place last year, could the separate attacks of military personnel on Canadian soil have been averted? It is difficult to see how. The Ottawa assailant was not on the RCMP’s radar; the Quebec suspect was, but law enforcement had inadequate resources to monitor him.

“So called micro-terrorists, or lone wolves, are simply immune from communication interception. The utility in potentially sacrificing civil rights in the vain pursuit of perfect security, which is entirely impracticable, is therefore questionable.”

3. The Libertarian Party of Canada

“The Bill will give Canada’s spy agencies more powers and more jurisdiction over the private information of innocent Canadian citizens, with no increase in civilian oversight. It also significantly increases the domestic powers of CSIS, and the ability to place people on a no fly list. What makes this Bill especially concerning, is the fact that there is lots of room for interpretation. It significantly and arbitrarily limits free expression, subjects Canadians to ever increasing privacy breaches, and raises questions about foreign travel data — which is being shared with foreign surveillance agencies.”

The Canadian Constitution Foundation — a right-leaning charity that advocates “individual freedom” and “economic liberty,” and counts National Post comments editor Andrew Coyne, as well as individuals connected to the right-wing Fraser Institute, on its executive and advisory boards — warns that the way Bill C-51 is worded could allow the government to crack down on legitimate criticism and free speech under the guise of fighting terrorism:

“If you post an anonymous blog about a sensitive political subject—say, criticizing Canada’s military role in Afghanistan—it’s now legal for the authorities to have your post wiped from the web and have you tracked down and put behind bars.

“Does that sound paranoid?

The sad truth is that it’s not — especially if you look at the wording involved. Bill C-51 doesn’t just deal with statements that advocate terrorism; it also covers statements that “promote” terrorism. To be found guilty, the person who made those statements doesn’t need to have known his words or images would lead to an act of terrorism. It’s enough that he was simply ‘reckless’ about whether what he was saying might cause someone out there to commit a terrorist act.”

And then there’s Rex Murphy, who recently issued Canada a strongly-worded call to arms, calling for “the fullest Parliamentary, media and democratic testing” of Harper’s terror bill and “the fullest and most strenuous scrutiny and opposition we are capable of.”

“Every clause should be fought over. Every potential advance on the liberty of the citizen should be examined as to its ultimate necessity.”