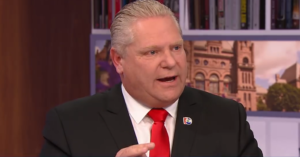 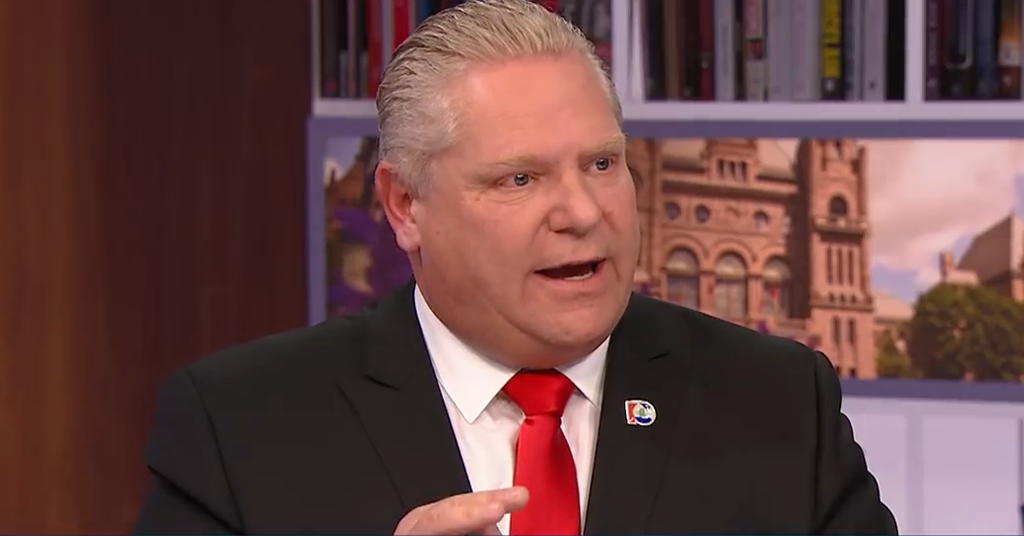 Doug Ford won the Ontario PC leadership by pandering to the religious right. Here’s a reminder of what he’s promising them.

Ford, who campaigned alongside controversial homophobic and anti-Semitic preachers and secured the support of anti-abortion groups, carved his path to victory by selling memberships to groups on the social conservative fringe of Ontario politics.

The religious right, who signed up over ten thousand members in a vote that saw 64,000 ballots cast, are already loudly taking credit for Ford’s victory.

Now that he’s won the leadership, the anti-abortion activists and sex-ed conspiracy theorists who elected Ford will be looking for him to repay his debts.

Here are a few of the most extreme promises Ford made to win the support of the religious right:

If elected Premier, Ford says one of the first things he’s going to do is “repeal the sex-ed curriculum” – whatever that means.

Speaking to a room of conservatives in Lindsay, Ontario last month, Ford promised the full “repeal” of the sexual education component of the province’s Health and Physical Education curriculum.

During his speech, Ford falsely claimed the Ontario government is exposing children to explicit teachings on sex and gender as young as “grade two”:

In fact, Ford’s claim is demonstrably false: lessons on “sex” or “gender” appear nowhere in grade two – at that grade level, the curriculum only teaches students about the “stages of development” and “oral health” (ie the process of aging and brushing your teeth).

2. Doug Ford says he would allow his backbenchers to table legislation on restricting access to abortions

In an interview with the anti-abortion group RightNow, Ford stated: “I am personally pro-life” and “I believe in the sanctity of life.”

While Ford was careful to say he would not personally table legislation placing restrictions on womens’ reproductive rights, in the next breath he told the anti-abortion group he would let backbenchers table legislation targeting abortion:

“I will allow MPPs to draft, bring forward and debate any legislation that is important to them … I will never muzzle members of our caucus.”

The anti-abortion group was apparently so pleased with Ford’s views on abortion they awarded him 50 out of 60 points for his “policies and principles.”

3. Doug Ford opposes a law that makes it illegal to protest and harass women outside abortion clinics

Last fall, the Ontario legislature moved to fast track Bill 163, the “Protecting a Woman’s Right to Access Abortion Services Act,” which creates safe zones to prevent anti-abortion protesters from confronting and harassing patients as they enter or exit abortion clinics.

The legislation enjoyed multi-partisan support and saw the entire PC caucus joined Liberal and NDP MPPs in voting in favour of the common sense law – only Jack Maclaren of the fringe Trillium Party voted against Bill 163.

Despite this, last month Ford told the anti-abortion group Campaign Life Coalition he opposes Bill 163 too.

4. Doug Ford would give parents the power to block a teen’s abortion

Ford also said he would “welcome” dangerous, unethical and likely unconstitutional legislation that would give parents the power to block a pregnant teen’s abortion.

Asked by the anti-abortion group RightNow if he supports “the introduction of legislation that would mandate parental involvement when a minor requests an abortion,” Ford said this:

“You know, most procedures in this province require a minor to have the consent of a parent. I can’t think of a more life-changing procedure for a young woman than an abortion. I think that is an important discussion to have and I would welcome any member who wanted to bring it forward in the Legislature to do so.”

“Kids can’t even get their tonsils out without the approval of their parents, I think we’ve got to consult parents.”

Leaving aside that the Supreme Court has already ruled teenagers do not need parental permission to see a doctor and Ford’s idea likely violates the constitution, the American Medical Association has also ruled Ford’s idea breaches doctor-patient confidentiality and is represents a major violation of medical ethics.

5. Doug Ford would give religious doctors the right to refuse to refer patients seeking abortions

Ford has yet another idea to butter-up social conservatives and create barriers to accessing safe abortion services.

Last month, Ford told the anti-abortion group Campaign Life Coalition he will table legislation that would permit doctors who object to abortions on religious or moral grounds the right to refuse to refer patients to another doctor willing to perform the medical procedure.

In January, an Ontario court ruled doctors who object to medical procedures such as abortion or euthanasia on religious grounds must provide a referral to patients.