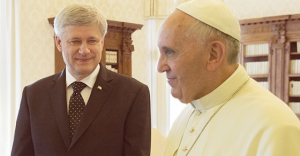 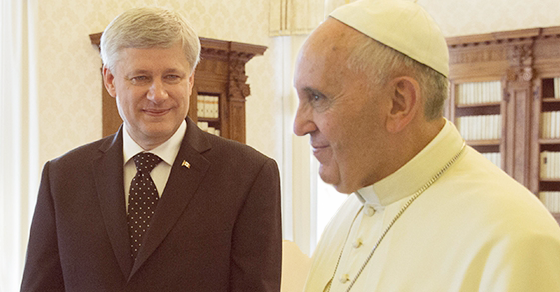 Prime Minister Stephen Harper could learn a thing or two about morals from @Pontifex when they meet at the Vatican Thursday.

Prime Minister Stephen Harper could learn a thing or two about morals from @Pontifex when they meet at the Vatican Thursday.

Why’s that? Because Pope Francis has become a powerful voice exhorting the world to see social and economic issues as important moral issues.

And they’re also issues that Harper and his Conservative government don’t take seriously or refuse to act on. Here are four examples:

1. The root cause of evil is inequality

Inequality is the root of social evil.

In a 2013 essay, Pope Francis elaborated:

“Today we have to say ‘Thou shalt not’ to an economy of exclusion and inequality Today everything comes under the laws of competition and the survival of the fittest, where the powerful feed upon the powerless. As a consequence, masses of people find themselves excluded and marginalized.”

In Canada, inequality is even worse than many Canadians think. And the Harper government is championing policies that will exacerbate it.

2. Greed is not good

While Harper has long been a believer in “the power of free markets,” in a 2013 exhortation the Pope criticized “the new idolatry of money,” adding that this “culture of prosperity deadens us”:

“Some people continue to defend trickle-down theories which assume that economic growth, encouraged by a free market, will inevitably succeed in bringing about greater justice and inclusiveness in the world. This opinion, which has never been confirmed by the facts, expresses a crude and naïve trust in the goodness of those wielding economic power and in the sacralized workings of the prevailing economic system.

Meanwhile, the excluded are still waiting. To sustain a lifestyle which excludes others, or to sustain enthusiasm for that selfish ideal, a globalization of indifference has developed. Almost without being aware of it, we end up being incapable of feeling compassion at the outcry of the poor, weeping for other people’s pain, and feeling a need to help them, as though all this were someone else’s responsibility and not our own. The culture of prosperity deadens us.”

3. Issues of labour and poverty are fundamentally about human dignity

Without work, without possibilities, without any means of escape…human beings are themselves considered consumer goods to be used and then discarded.

Canada’s current unemployment rate is officially 6.8%, but the actual rate is 9.9% when you take into account involuntary part-time work. This is part of a trend showing precarious work is “the new norm” and job quality is down.

4. Climate change is a moral issue

Ecology is essential for the survival of mankind; it is a moral issue which affects all of us.

After extreme weather hit across the globe in 2012, Pope Francis was quick to draw a connection to human activity:

“The monopolising of lands, deforestation, the appropriation of water, inadequate agro-toxics are some of the evils that tear man from the land of his birth. Climate change, the loss of biodiversity and deforestation are already showing their devastating effects in the great cataclysms we witness.”

Just a few days ago, Harper teamed up with Japan to weaken a statement on the reduction of greenhouse gases at the G7 meeting in Germany, leaving the issue of climate change to his great-granddaughter in 85 years.