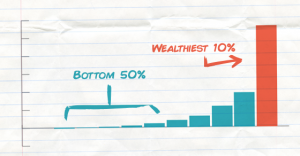 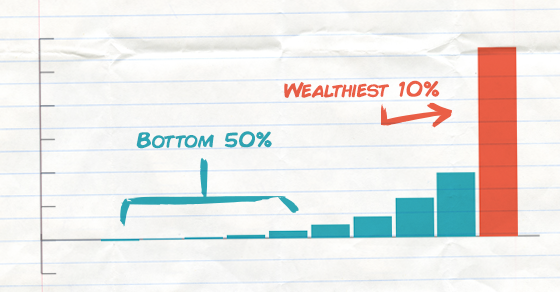 While a small handful of British Columbians have grown wealthy in recent years, low wages and rising costs of living have caused the gap between rich and poor to increase dramatically – so much so, BC is now the most unequal province in Canada. Sticking to carefully scripted talking points on jobs and balanced budgets, you won’t find BC Liberal Premier Christy Clark with much to say about the extreme wealth and poverty increasingly polarizing the province.

But inequality in BC is currently the highest in Canada and growing quickly. One factor driving BC’s wealth gap are changes shifting the tax burden from the wealthy onto BC families.

The Canadian Centre for Policy Alternatives agrees that the BC Liberals’ “decade of tax cuts” and “regressive changes to the provincial tax system” helped to “exacerbate growing income inequality in BC.”

And that trend has continued during Clark’s time as Premier – the BC Poverty Reduction Coalition points out the income gap is growing faster than most provinces in the country, noting “the average household income of the top 1% in BC has increased by 36%” since the mid-2000s.

And the latest available data on wealth from Statistics Canada shows the wealthiest 10% in the province actually own more than half of all wealth in BC: Symptoms of this growing gap are everywhere you look.

On one hand, many workers in BC work full-time jobs and still end up below the poverty line — half of those who turned to food banks in 2016 were people who work low-wage jobs and their children.

On the other end of the spectrum, a Bank of Montreal study last year pegged the average value of a wealthy person’s house in BC at $3.9 million, about $2.2 million higher than what a wealthy person might pay in Ontario.